What is the Dongzhi Festival, where and how is it celebrated

While the return of the light is the star of the show in winter solstice celebrations throughout the world, the Dongzhi Festival (observed in China, Taiwan, South Korea, Japan and Vietnam) is one of the most beautiful — and meaningful. Taking its origins in Imperial China, the Dongzhi Festival doesn’t look exactly like it did 2,000 years ago, but the underlying meaning remains the same. It’s a time to bond with family; nourish the body with rice balls, meat dumplings, and hearty soups; and celebrate the changes that are on the horizon.

What is the Dongzhi Festival?

The Dongzhi Festival is a one-day celebration that occurs every year on the winter solstice, between December 21 and 23. Dongzhi is a Chinese word that can mean either “winter’s extreme” or “winter’s arrival.”

The festival is rooted in the ancient philosophy of yin and yang, which represents harmony and balance in the universe. On the dark winter solstice, negative yin energy is at its peak. From that point on, positive yang energy will grow as spring approaches and the daylight hours lengthen.

The festival originated in China during the Han Dynasty. During that time, the lunar calendar was an essential part of everyday life because people relied on the seasons to survive. The winter solstice indicated the coming of a warmer climate and an easing of life conditions.

In Imperial China, family clans visited their ancestral temples to worship and make offerings to their deceased relatives. Afterward, families gathered to cook and have a lavish dinner together.

While the tradition of worshipping ancestors has faded away in most regions, it’s still a central component of the Dongzhi Festival in Taiwan, Shanghai, and the southern coast of China. Families sweep and repair the graves of their deceased loved ones, pray, burn incense, and offer food.

Nowadays, the Dongzhi Festival is most often a relatively low-key affair. Some villages organize public events with performances, art displays, food stalls, and more. However, the festival is mostly a private celebration. The main event is reuniting with family to cook and enjoy a warm, hearty meal.

Culinary traditions of the Dongzhi Festival throughout Asia

Tangyuan can either be plain or contain sweet or savory fillings. No matter what, they’re always served in warm broth or syrup, which is important because, on their own, tangyuan are rather bland. Traditional tangyuan is white, but nowadays, it’s popular to dye them bright colors like pink, green, and yellow. Exact recipes vary between regions and even between families, but it’s most often served as a dessert. A common preparation is to place the balls into a syrup made of sweet pandan leaves, ginger, and sugar.

The practice of eating tangyuan during the Dongzhi Festival began as a way for the less wealthy to participate in the celebrations. They couldn’t afford the filling foods traditionally served, like meat, so they made tangyuan instead. The roundness of the balls and the bowls used to serve them symbolize unity and family togetherness, a key element of the Dongzhi Festival. Tangyuan is very similar to the Chinese word tuanyuan, which means reunion.

For a while, the Dongzhi Festival marked the start of the new year. Even though Chinese New Year (celebrated in February) has now surpassed the Dongzhi Festival in importance and popularity, some people celebrate it as the “Little New Year.” There’s a saying that when you eat tangyuan, you become a year older. South Koreans have a similar saying about their traditional winter solstice food, patjuk (red bean porridge). 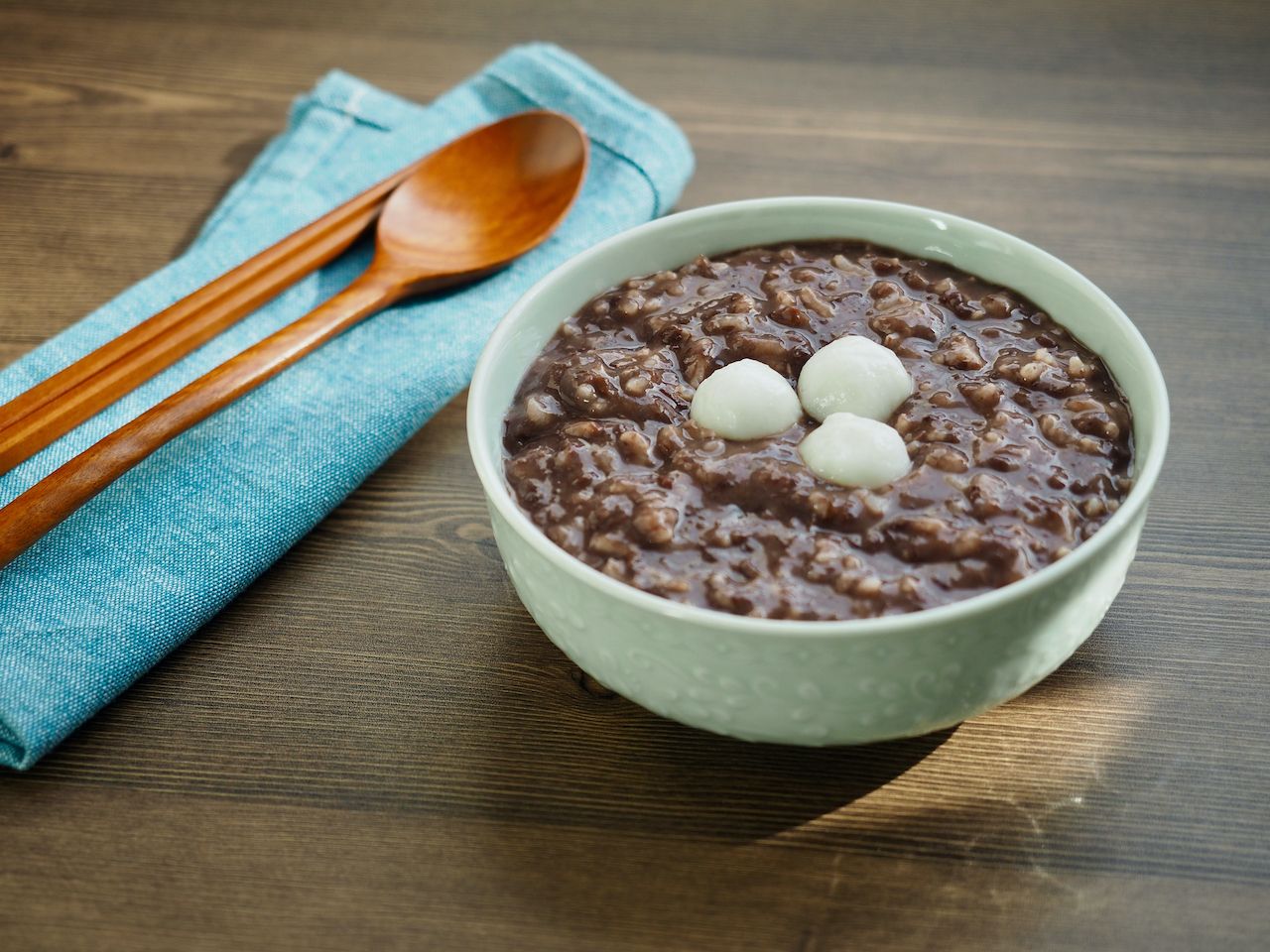 Along with preparing tangyuan, the Taiwanese make nine-layer cakes — glutinous rice cakes steamed in the shapes of animals that bring good luck such as chickens, tortoises, and pigs — to give as offerings to their ancestors. According to the Taiwanese, the winter solstice is the best time to rest and restore the body with high-fat and high-yang medicinal foods like mutton soup and ginseng.

In Northern China, people eat dumplings stuffed with lamb or other meats. They also include warming ingredients like ginger and garlic. This custom comes from an old Han Dynasty tale. After seeing the poor struggling to stay warm in the cold, famous doctor Zhang Zhongjing fed them ear-shaped dumplings to keep their ears from getting frostbite. To this day, some say that your ears will freeze off if you don’t eat dumplings during the festival.

In Japan, people eat foods that end with the Japanese “n,” such as ninjin (carrots) and renkon (lotus roots). These foods are said to bring good luck because the “n” sound is reminiscent of the word un (fortune). “N” is also the last character of the Japanese alphabet. This is fitting for the winter solstice, which signifies the end of dark times. The Japanese also use the citrus fruit yuzu in their winter solstice traditions but not for feasting. Instead of using them in their cuisine, they bathe in a yuzu-scented hot spring to cleanse and warm the body.