The difference between coffee in the north and south of Italy

In Italy, the phrase prendiamo un caffè – “let’s get a coffee” – is loaded with meaning. From the macchiato you throwback at an opulent bar in Milan to the espresso you savor al fresco in Palermo, getting a coffee in Italy involves engaging with a well-established set of cultural and culinary regional practices.

In 1905, Luigi Bezzera and Desiderio Pavoni, both mechanics from Milan, teamed up to improve on the steam-powered coffee machine that launched at Turin’s General Exhibition in 1885. The improvements Bezzera and Pavoni added enabled the water to get hotter and the machine to produce more pressure when brewing. While their machine didn’t produce espresso by modern standards, coffee could be prepared faster than ever before.

This quick-serve style of coffee arrived alongside the industrial revolution. Coffee transformed into an affordable indulgence that exhausted workers could grab running to work. But it took Italy’s economic boom following the second World War for espresso as we know it today to embed itself into Italian culinary culture.

While American money from the Marshall Plan was helping to reboot the Italian economy and increase wages, Milanese engineer Achille Gaggia was building a lever-operated horizontal espresso machine. Not only did the horizontal positioning enable drinks to be briskly passed from server to customer, the machine also exerted nine bars of pressure. This pressure resulted in a frothy cap on top of the coffee, known as crema. Modern espresso had arrived.

If you’ve visited Italy and tried to order a post-lunch cappuccino, you probably are already familiar with the coffee rituals and routines that Italians revere. Alongside these rituals sit unique recipes, roasters, and drinking styles, all of which vary across Italy’s twenty-one different regions. Being fluent with these nuances is key to enjoying your caffè all’italiana (Italian-style coffee).

Before we delve into these regional traits, we need to establish the coffee protocols that are universal throughout Italy. First, call it caffè, not espresso. Second, milk is reserved for morning drinks – you’ll struggle to find an Italian drinking a cappuccino as an afternoon pick-me-up (bad for the digestion, they’d say). You’ll pay less to drink standing at the bar, as the government controls the price of an espresso to keep it affordable (a 2021 survey says the price of a standard caffè tops out at 1.21 euro in Trento). Drinking at the bar is also a social experience; Italians see coffee as an excuse to chat. This ritual starts in the morning, when people catch-up with friends over colazione al bar (breakfast at the cafe), then continues throughout the day with regular breaks for a pausa caffè (coffee pause). 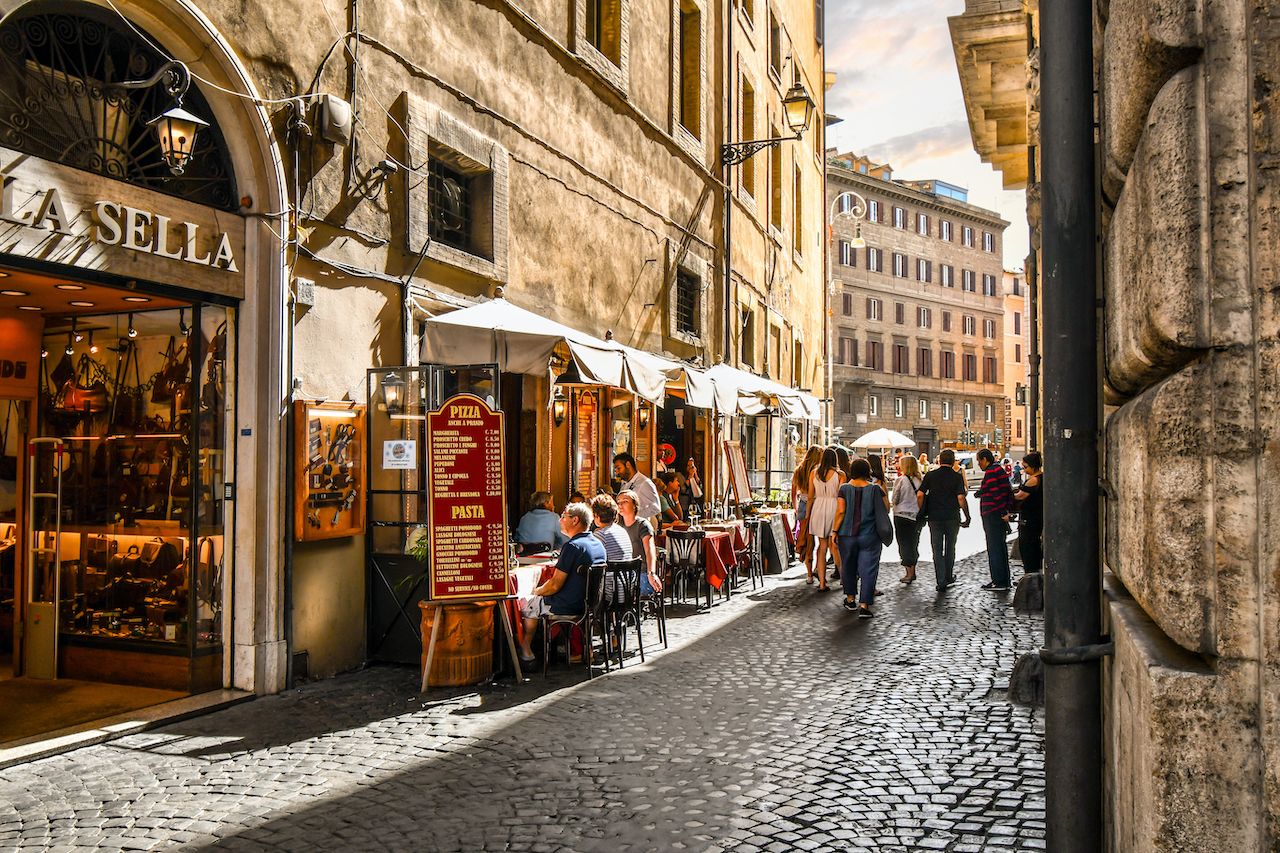 Head to the North – which for the purposes of this article we’ll say extends as far south as Rome – and you’ll be among the country’s most illustrious coffee cities. There are internationally renowned roasters in Turin (Lavazza) and Trieste (Illy), while opulent, storied cafes dot cities from Florence to Bologna.

No matter where you go in the North, there are some key commonalities between the styles of coffee you’ll encounter and ordering strategies you’ll need to get your perfect drink.

The majority of cafes serve only one brand of coffee. In the North it’s frequently Illy or Lavazza, though also common is Caffè Vergnano, which comes from a town outside Turin. While these are reliable options, you should also seek out smaller, regional roasters to sample more unique flavors. Each city tends to boast their own hyper-local roaster, from Caffè Janko in Pavia (Lombardy) to Spinetta in Valdobbiadene (Veneto). Also notable are Caffè del Doge, tucked behind the Rialto Bridge in Venice’s San Polo district, Rome’s Sant’Eustachio near Piazza Navona and Bergamo’s third-wave roaster Bugan Coffee.

These northern roasters tend to favor Arabica coffee beans, which produce a drink with a thick body. The aroma can range from floral to caramel notes, depending on how long the beans are roasted. 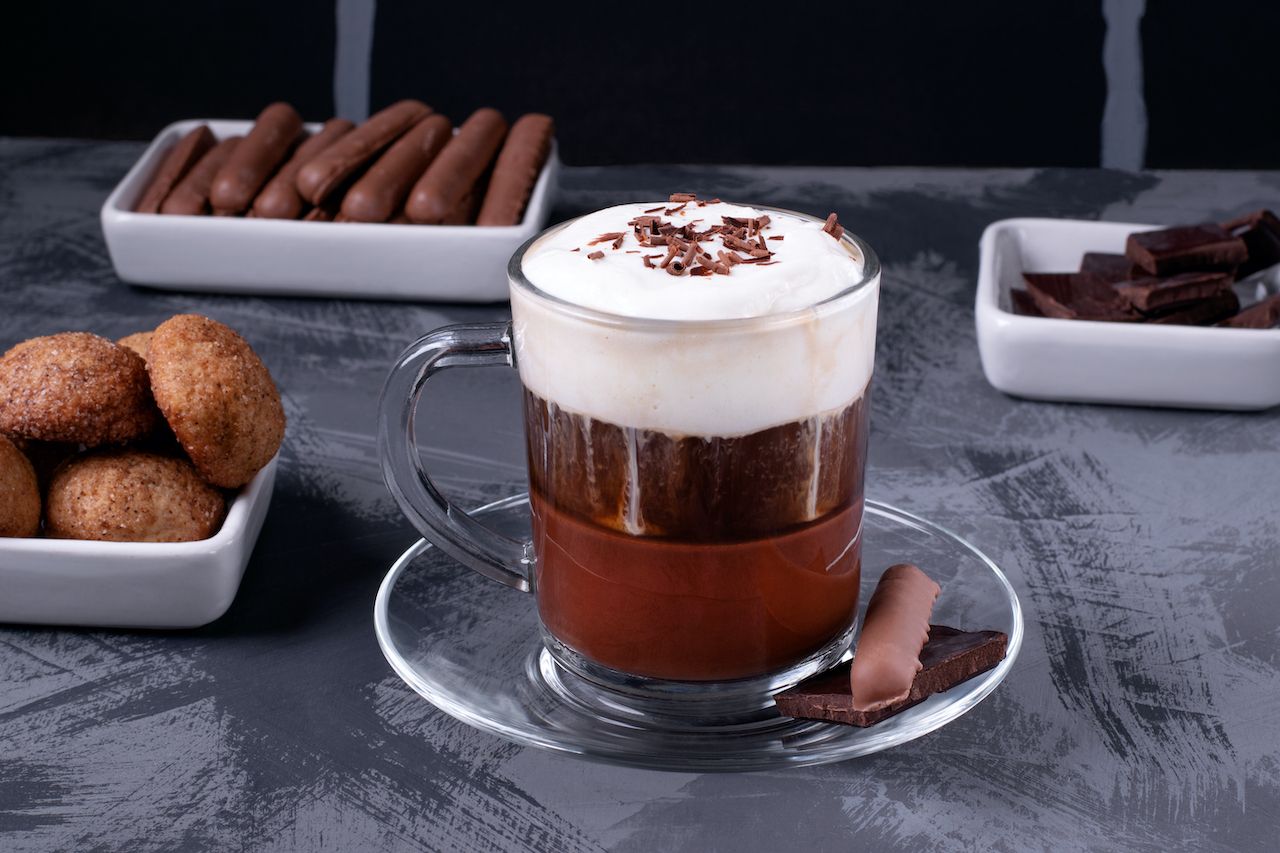 Arabica coffee provides an ideal canvas for dessert-worthy drinks. For a chocolate-dusted pick-me-up, head to Milan and order a marocchino, which mixes espresso and steamed milk with a generous dusting of cocoa powder. Turin’s bicerin layers espresso, hot chocolate and milk with a spoonful of whipped cream on top – you can find it across the city, or head to its source Caffè Al Bicerin. Complete your chocolate-coated coffee tour in Padua, where the historic Caffè Pedrocchi serves espresso blended with mint cream and cocoa powder.

There are also more moderately flavored drinks to sample. When in Trieste, opt for a capo in b. Served in a small glass, the drink has more milk than a macchiato but less than a cappuccino. A similar formula is available in the Veneto by asking for a macchiatone. If you’re trying to pass as a local near Milan, you can order your cappuccino by requesting a cappuccio. And for a post-dinner pick-me-up, Livorno in Tuscany offers the potent ponce (punch), which combines espresso, rum, sugar and a lemon peel.

For breakfast around Milan or Turin, order a brioche. This croissant-shaped pastry can be eaten plain, or vuota (empty), but is more likely to come filled with sweet options like crema pasticceria (pastry cream), marmellata (jam, typically apricot) or gianduia (or its name-brand equivalent, Nutella). And if it’s dessert for breakfast you’re craving, seek out bomboloni, sugar-dusted doughnuts filled with pastry cream, or a veneziana, a cream-filled pastry most commonly found around Milan. 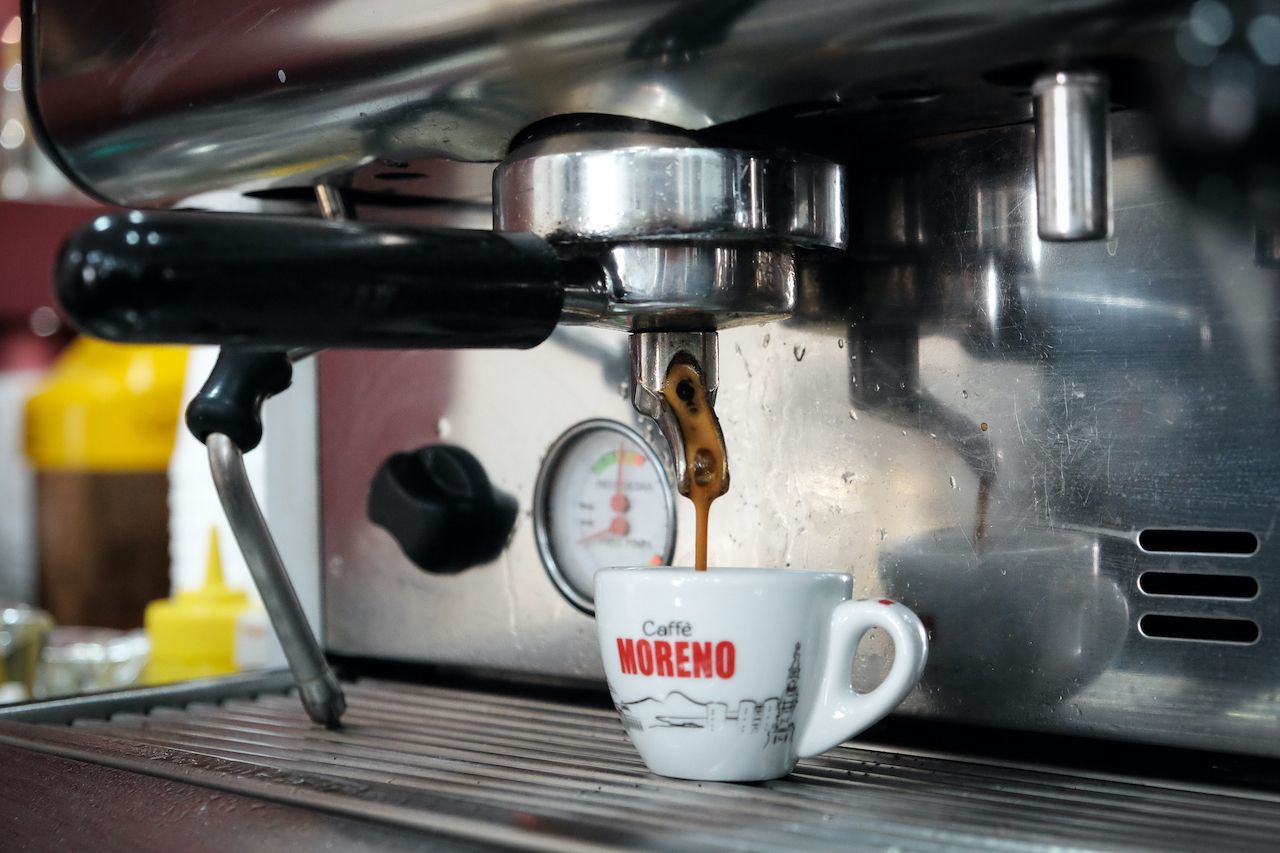 Once you head south of Rome, coffee flavors and rituals transform. Broadly speaking, southern coffee roasters tend to appreciate Robusta beans more than they do in the North. This quick-growing, hearty coffee varietal has a strong, bitter taste. The presence of robusta in the coffee gives the area’s drinks a distinct bittersweet tinge.

Many people choose to accentuate robusta’s flavour by ordering a caffè ristretto, or a restricted coffee. In comparison to a standard caffè, caffè ristretto is made by letting water pass more quickly through the coffee grounds during brewing. While this results in a smaller overall quantity of liquid, the flavour is more concentrated. The resulting coffee is also lower in caffeine since the water has less contact time with the grounds during which to extract it. Most people sweeten their caffè ristretto with sugar.

Naples should be your first stop. Start by popping into a postage stamp-sized bar on Spaccanapoli – a collection of streets splits the historic center in two. Inside, you’re likely to find locals trading quipps about soccer over a caffè al volo (coffee drunk on the run). From there, walk over to Caffè Gambrinus, whose belle epoque interior has hosted leading Italian intellectuals. Splurge on table service to sip coffee elbow-to-elbow with well-heeled locals savoring baba au rhum, Naples’ favorite cream-stuffed, liquor-soaked pastry.

This dichotomy of the grand cafe and the casual bar permeates southern Italy. In Palermo you can bounce between wood-clad Antico Caffè Spinnato and trendy bars in the seafront Kalsa district. Cosenza’s (Calabria) Gran Caffè Renzelli opened in 1803, while in Lecce (Puglia) the cafe Doppiozero weaves together new American cuisine with Italian coffee rituals. And in Bari (Puglia), Martinucci serves traditional pastries among modern decor.

Both types of cafe offer an extensive array of one-of-a-kind, regional drinks. In summer, you can sample everything from a simple caffè sul ghiaccio (espresso over ice) to a caffè shakerato (espresso shaken with ice, milk and sugar). While these are available at bars throughout the south, there are a few more drinks that merit a detour. Head to Lecce to try the city’s iconic caffè leccese, which swaps the simple syrup in a shakerato for almond syrup. And in Sicily, it’s acceptable to order a granita al caffè (sweetened shaved ice with espresso and cream) all day long. 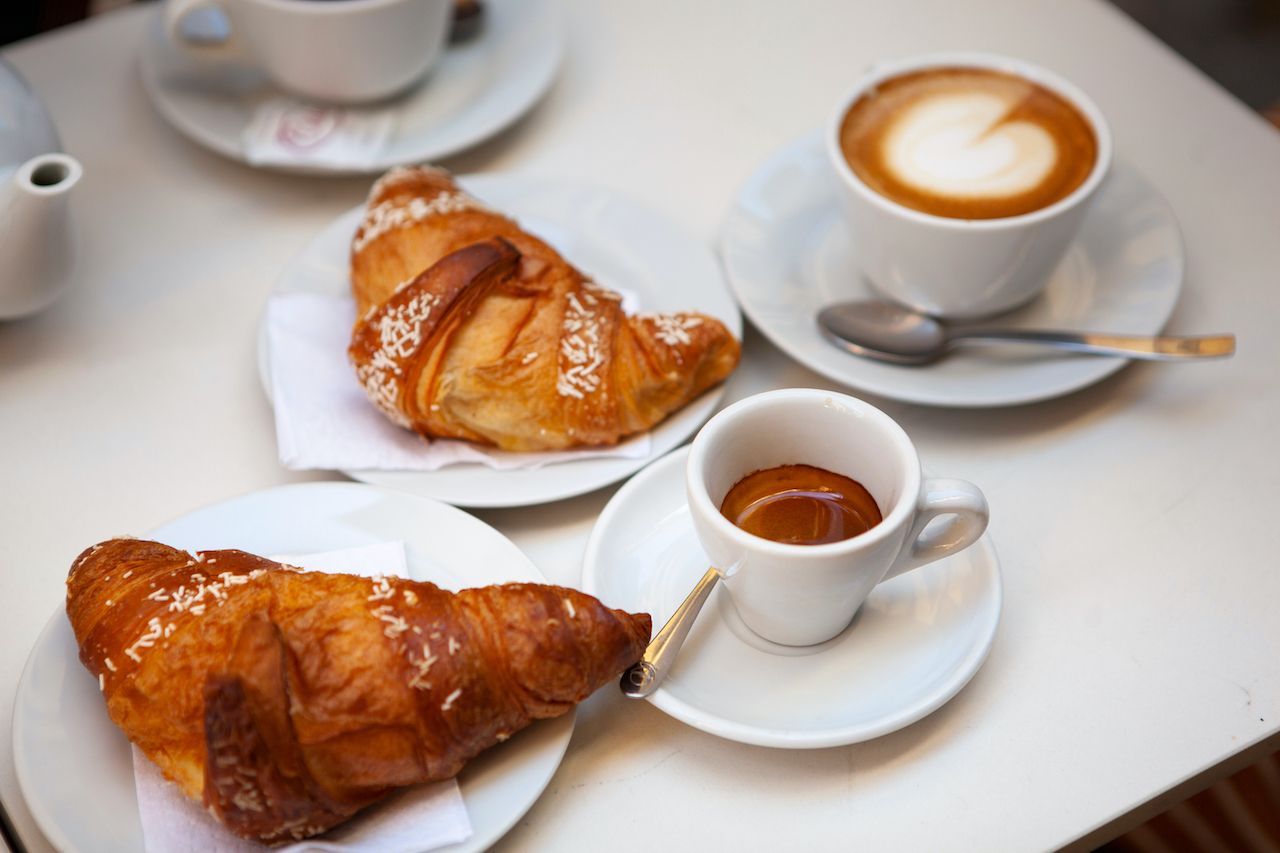 No matter what drink you choose, you’ll want to sample the region’s pastries alongside your coffee. While many of the breakfast pastries have the same crescent shape as their northern counterparts, in the South they’re referred to as cornetti. Order a brioche and you’ll receive a yeasted roll, sprinkled with sugar. Like in the North, you can find cornetti with many fillings, but pay special attention to those filled with regional specialties, such as ricotta or pistachio cream.

Southern pastries extend beyond cornetti. In Puglia, sample a pasticciotto. These ingot-shaped cakes combine a thick pasta frolla (shortcrust pastry) exterior with a filling of crema pasticceria, which can be studded with candied cherries or citron. Occasionally you’ll find slices of crostata (tart), slick with apricot jam. And you can even opt for a sfogliatella, a Neapolitan favorite. These can be made either riccia – which involves filling an ultra-flaky pastry with cream – or brioche – stuffed with the likes of cream, chocolate or Nutella.