The best Rails to Trails routes in the United States

More than 1,400 unused railways traverse the plains, mountains, coastlines, and cities of the United States, according to Abandoned Rails. Some once carried cargo and coal, others shuttled workers to job sites and dreamers towards their visions of gold and glory in the wild west. By the early 1900s, more than a quarter-million miles of active rail stretched across the country. Now, groups of visionary minds led by the Rails to Trails Conservancy are repurposing some of these abandoned railways as biking and hiking trails. These “rail trails” are achieving notoriety. By 2021, every US state has rail trails, with more than 2,000 miles of them currently available for public use. These are our seven favorite rail trails.

Photo: Friends of the Northern Rail Trail in New Hampshire/Facebook

The Northern Rail Trail runs 59 miles from Boscawen to Lebanon, New Hampshire. En route, you’ll pass the maple and red spruce that provide much of the state’s famed fall foliage. Parts of the trail are crushed stone hard pack, according to the trail’s site, while the rest is made of cinder. An old caboose lies in route, a testament to the trail’s original use. Riders who do not wish to do the entire ride in one day can book lodging in East Mandover or camp at the Mascoma Lake Campground. 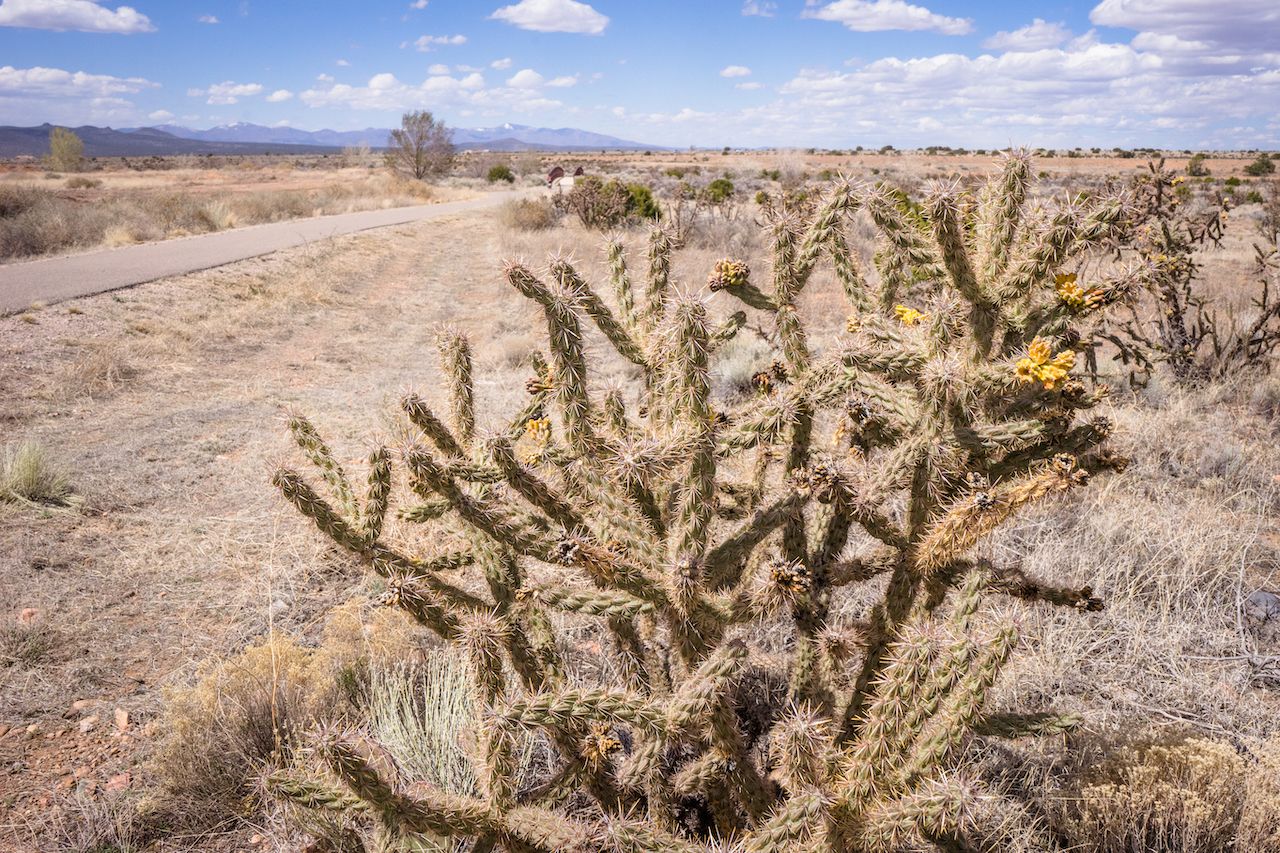 The Santa Fe Rail Trail is unique on this list because it follows a still-active rail line, built and operated by the Atchison, Topeka & Santa Fe Railway. Bikers, hikers, and runners can traverse 15 miles from the Santa Fe Depot in town to US Route 285. Views along the way include the historic city center and the desert southwest landscape that surrounds it, with the Sangre de Cristo Mountains towering in the background. Part of the route is paved, though much of it is dirt trail, making this route ideal for gravel bikes.

Colorado’s Peaks to Plains Trail currently runs 4.2 miles through Clear Creek Canyon in Jefferson County west of Denver. The vision of both the state government and county governments is to create 65 miles of rails to trails from the west Denver suburbs to Loveland Pass. The paved portion currently runs along the Colorado Central Railroad former path, with the final trail descending (or ascending in the opposite direction, for hardy riders) from the high Rockies to Golden, where riders can take a dip in Clear Creek. 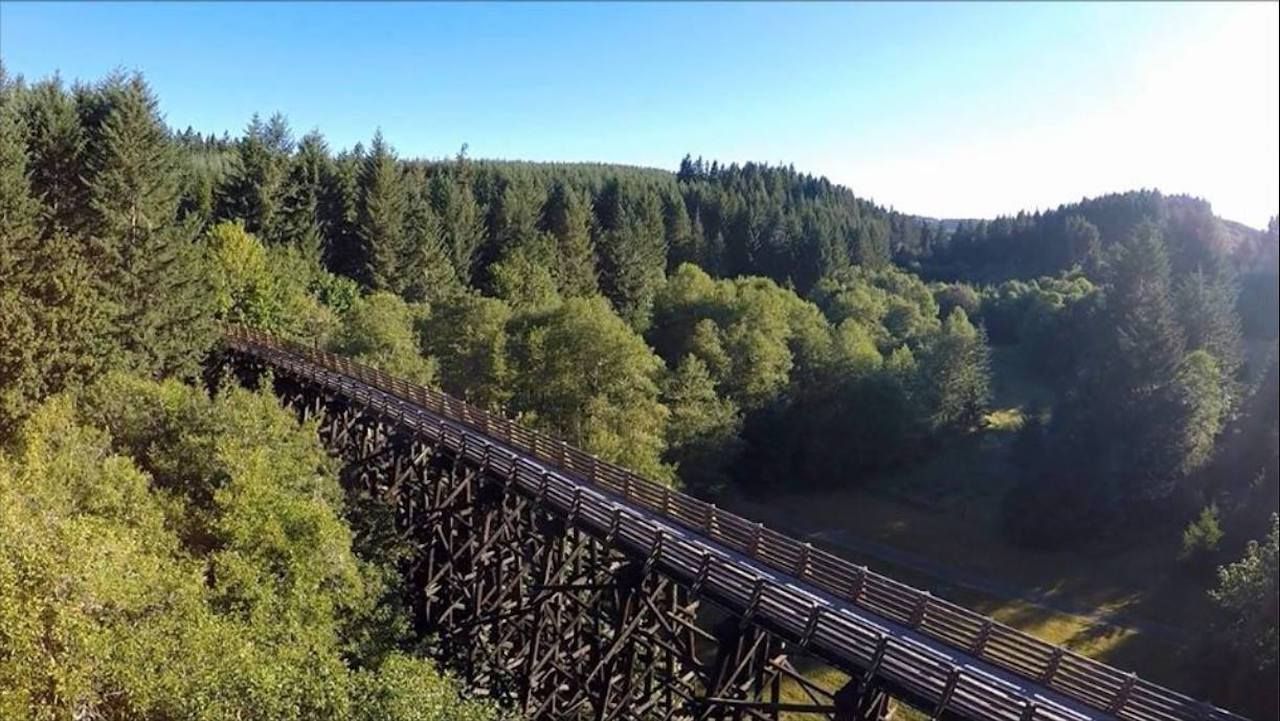 The Banks-Vernonia State Trail runs 21 miles between Banks and Vernonia, appropriately. Riders cross the 80-foot-high Buxton Trestle, with views out over the lush green valley below and into the dense hillsides of the Coast Range on either side of the trestle. An interesting feature of this trail is that it consists of a paved section for bikers and runners, along with a dirt trail section for equestrians and hikers running adjacent to the paved segment. As a result, it is accessible to a wider range of recreationists. 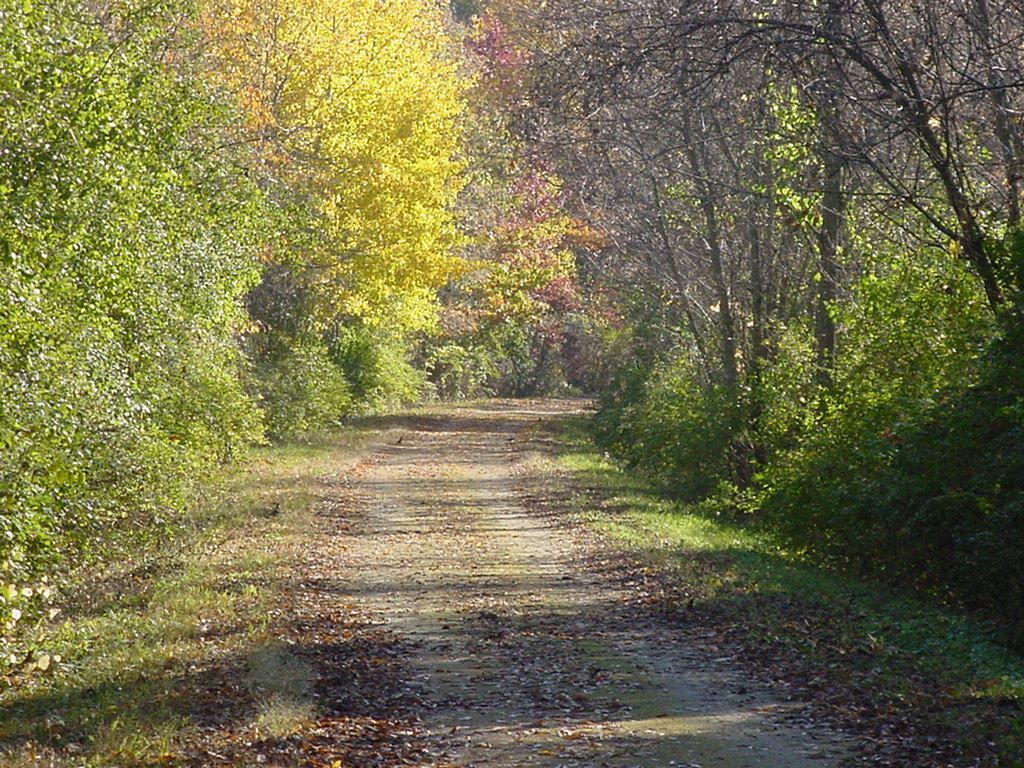 Wide-open country views and charming towns make the White River State Trail among the most popular of rail trails in the US. The trail runs 19 miles and passes through Elkhorn, Springfield, Lyons, Burlington, and Kansasville. Turn it into a full day or more by staying overnight in one of the towns. We recommend turning your ride into a “cheese curd tour,” stopping at two or more of the following: 1175 in Kansasville, Fred’s Parkview in Burlington, Flat Iron Tap in Lyons, Craftsman Table and Tap, and Culver’s in Elkhorn. In Springfield, If you wish to pedal further, the White River State Trail is part of the larger Route of the Badger, which offers more than 300 miles of connected trail across Wisconsin. 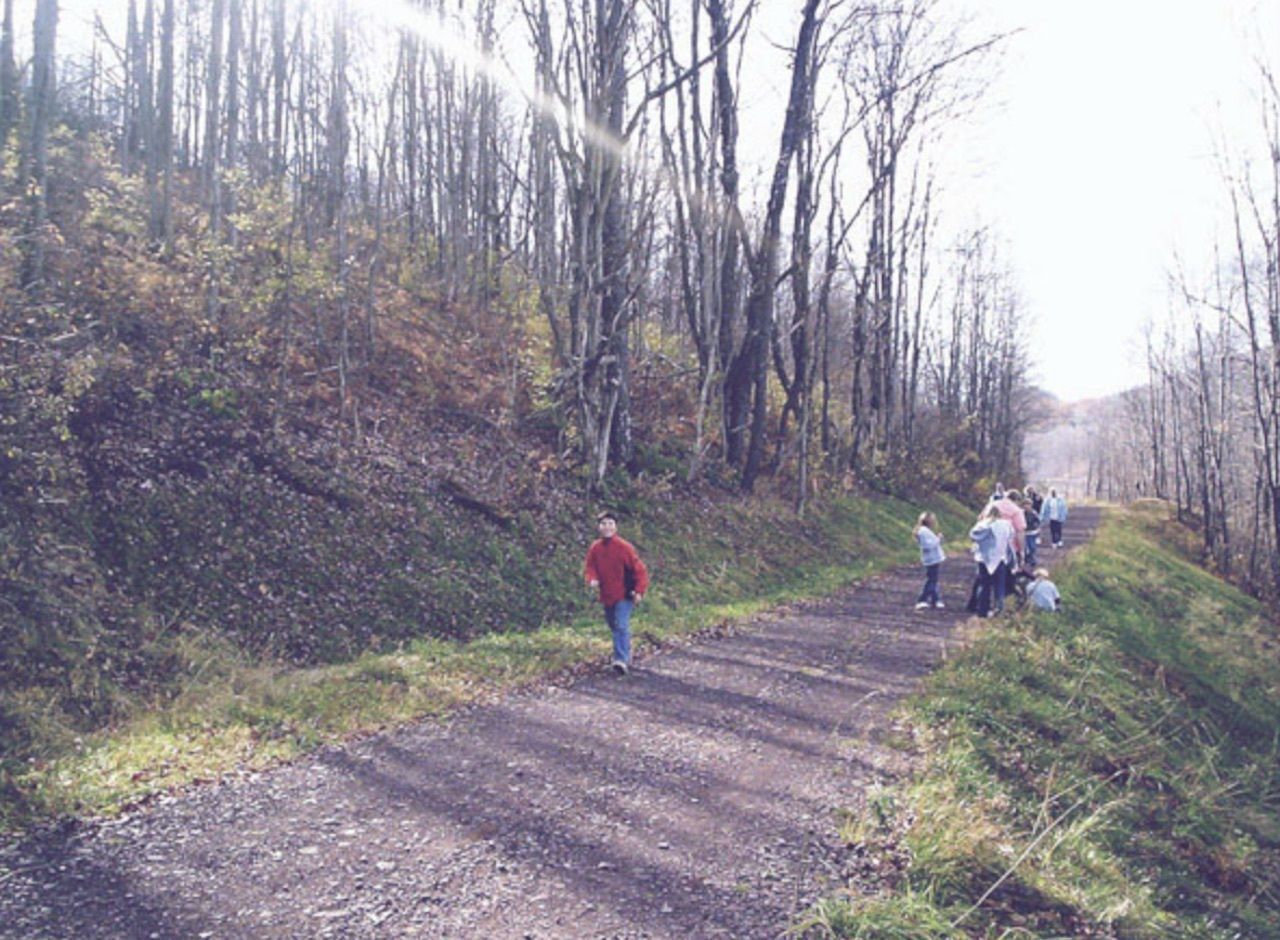 Upstate New York is home to nearly two dozen rail trails. None encapsulates the region’s natural beauty and abundant flora and fauna like the Catskill Scenic Trail. Here you can ride on bike or horseback, or hike your way through the rolling green Catskills, experiencing the route that the Ulster & Delaware Railroad used to run vital goods and supplies across New York from 1875 until 1932. In the winter, this trail is perfect for cross-country skiing, with long flat stretches punctuated by slight inclines that get the heart pumping. 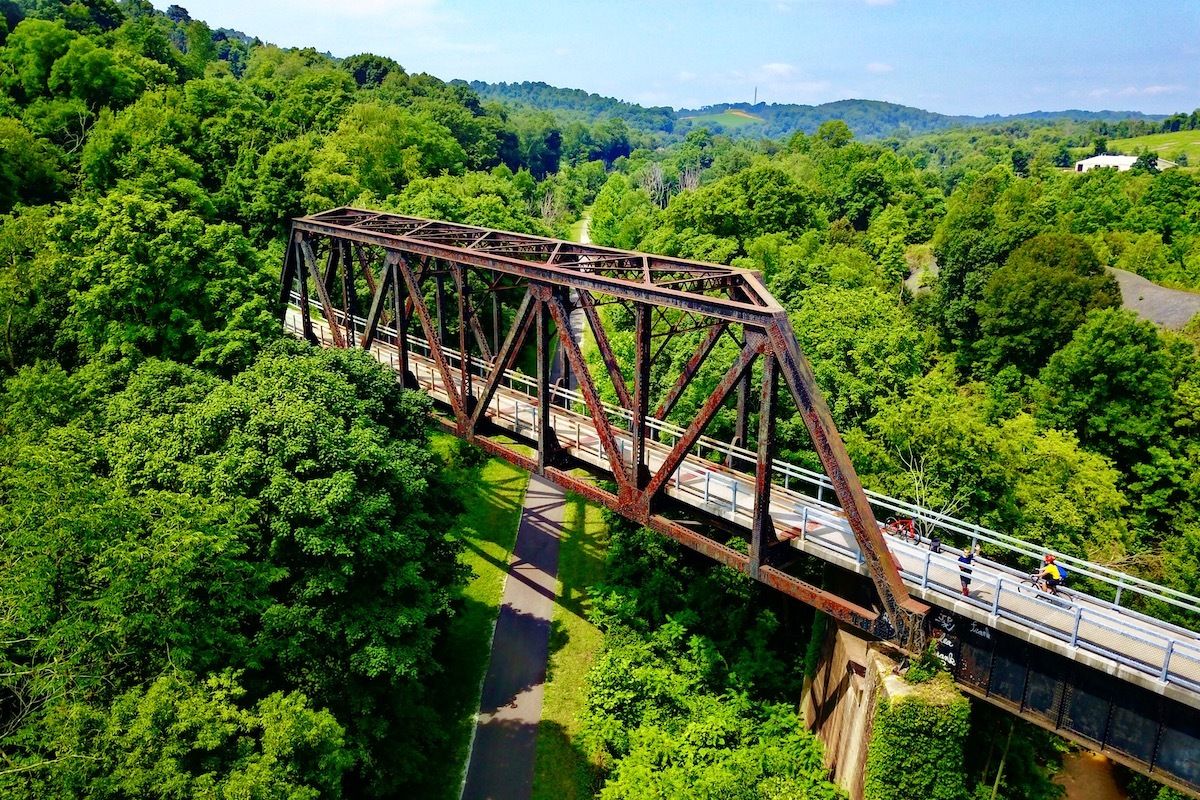 Rails to Trails’ biggest project is the Great American Rail Trail. This behemoth of a project aims to offer a coast-to-coast cycling experience, and when complete will stretch over 3,700 miles across 12 states. Currently, the trail begins in Washington, D.C. and runs along the northern US to Washington state, passing through Pennsylvania, West Virginia, Ohio, Indiana, Illinois, Iowa, Nebraska, Wyoming, Montana, and Idaho along the way.

In 2020, the group added over 100 miles in eight states to the 2,000 miles already in existence. The route will include established trails along with newly developed trails to connect them. One hundred percent of the trail will be separated from vehicle traffic, offering a peaceful and scenic way to explore the northern United States. No firm opening date has been announced, but the entire route is currently more than half done.