The best Armenian restaurants in Los Angeles and Hollywood

Haikuhie Keshishyan and her staff at Marouch are rolling out homemade dough that they’ll first cut into strips, then into small squares. Then, they’ll hand-fill the dough with savory ground beef marinated with Keshishyan’s secret family sauce. The squares will be folded in two, and the edges combined and pinched […]

Haikuhie Keshishyan and her staff at Marouch are rolling out homemade dough that they’ll first cut into strips, then into small squares. Then, they’ll hand-fill the dough with savory ground beef marinated with Keshishyan’s secret family sauce. The squares will be folded in two, and the edges combined and pinched shut into a bundle-like shape.

These are manti, a traditional Armenian dumpling that has as many variations as there are family recipes. In Keshishyan’s case, the tiny little boats of dough are boiled in a rich broth and served with a luscious garlicky yogurt-tomato sauce.

Until early 2019, 35-year-old Keshishyan was a full-time artist. Her Armenian great-aunt Sossi Brady and her Lebanese husband, Serge Brady, ran their restaurant in East Hollywood, aka Little Armenia, since 1982. They retired, and now Keshishyan is one of the rare women running an Armenian restaurant in a male-dominated industry — and hers is one of the oldest Armenian-Lebanese restaurants in Los Angeles.

From Glendale to Westwood, the Los Angeles metropolitan area is one of the centers of the Armenian diaspora. It has the largest Armenian population of any city in the US — 200,000 people of Armenian descent live in the area, according to the BBC. With this community comes traditions and, of course, food.

Armenia is a small landlocked nation in the southwest Caucasus, straddling Europe and Asia. Armenians left their homeland — which now borders Turkey, Iran, Azerbaijan, and Georgia — in three significant waves. The first was in the 1890s. Then, starting in 1915, the Ottoman Empire killed or forcibly deported people of Armenian descent. By the end of 1922, when the Ottoman Empire was dissolved and replaced by the Republic of Turkey, more than a million Armenians had been killed or forcibly deported, according to the Armenian National Institute. Recently, President Joe Biden became the first US president to declare formal recognition of the Armenian genocide, which many consider a precursor to the Nazi Holocaust.

When Armenians left their homeland, they traveled the world, and many came to America.

“The Armenians in California first migrated to Fresno because it reminded them of home, with vast fields to grow crops and grapes, corn, and potatoes,” notes Roman Keshishyan, Haikuhie’s husband. “Then they slowly trickled down to LA county, especially to Glendale and Hollywood. The area’s big melting pot of cultures made it possible for them to settle here.”

Today, LA is still one of the best places to taste how the region’s melting pot of cultures allowed Armenian restaurants to flourish. Each Armenian restaurant influences the LA culinary scene with its own version of Armenian food. There’s a vast diversity of offerings that vary by family traditions, ingredients, and techniques. These are the ones to try.

Where to eat Armenian food in LA

Marouch: Here, traditional techniques and a combination of Aleppo pepper, fenugreek, and other spices come together in complex dishes. Take, for example, the muhammara dip, which is flavored with peppers and pomegranate seeds, and kibbeh, an appetizer made with lean beef, crushed wheat, and pine nuts. Dolma (meat-stuffed vegetables) and basturma (spiced Armenian veal salami cut thin) are also crowd-pleasers. The Keshishyan’s traditional manti is served as an entree alongside shawarma plates, barbecued quail, and vegetarian mezze options of tabouleh, hummus, falafel, and baba ghanoush.

Marouch’s popular kababs (or kabobs) are amped up with an alluring secret ingredient that makes the chunks of beef, lamb, and chicken extra-tender. Eighty-nine-year-old Smbat Tataryan, Sr., Haikuhie’s grandfather, uses the same beef grinding technique he employed at his first restaurant in Sovetashen, Armenia. He also used them at Del Amo Steakhouse, a spot he opened in 1988 in Torrance, California, for 27 years. The kabobs come with onion, tomato, garlic sauce, almonds, rice, and pickles for an extra dose of flavor that can be topped with yogurt for tartness.

Carousel: The Tcholakian family offers Armenian-Lebanese fine dining at its best, complemented by live entertainment and belly dancing shows. There are more than sixty mezze (appetizers) to choose from, including the specialties of red tabbuleh made with bulgur and sautéed tomatoes and liver sautee, topped with sliced onions and spices.

Elena’s: The variety of different kabob platters is generous, flavorful, and priced under $20. The hummus is extra creamy, the tabouleh is fresh, and the strong coffee and consistently friendly staff have kept this Greek-Armenian eatery in business for over thirty years. 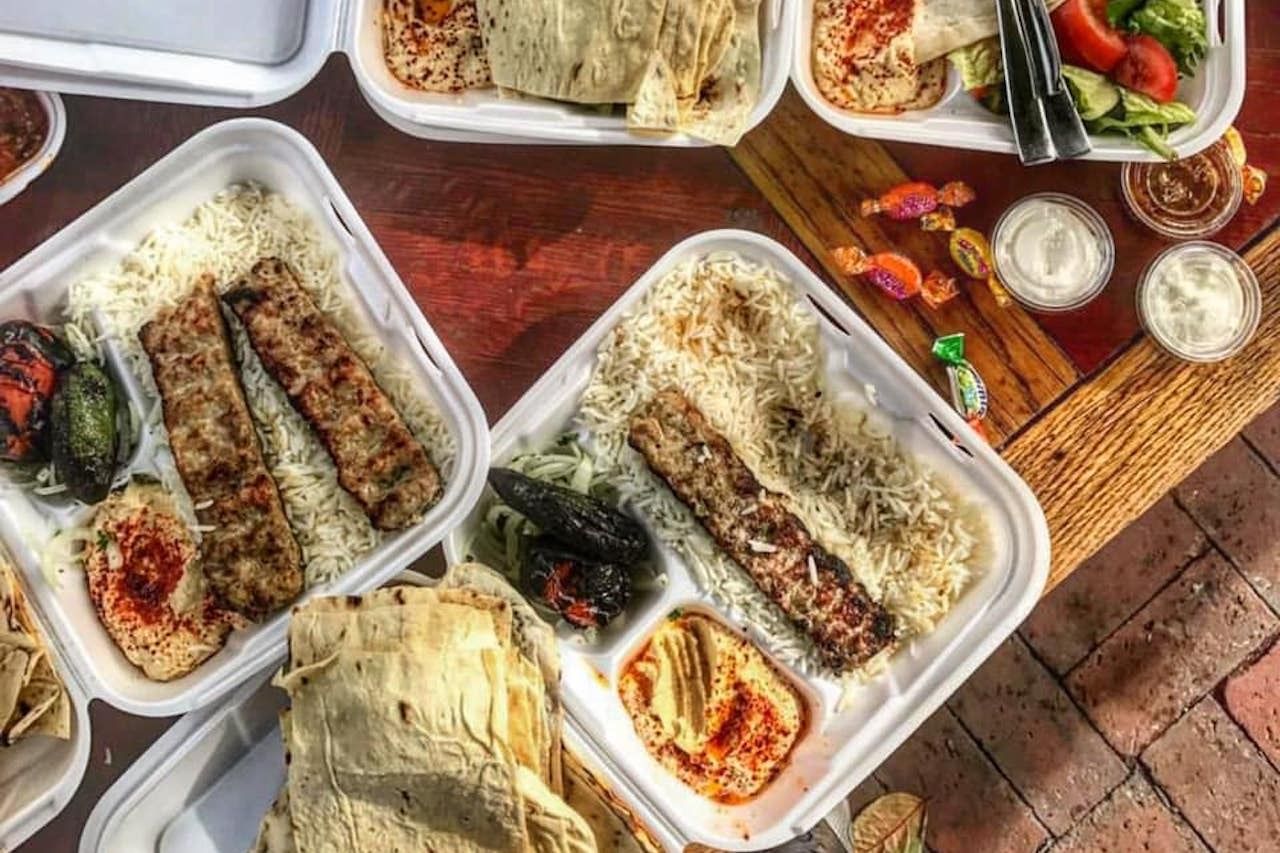 Miki Kabob: This 300-square-foot kabob joint in Glendale has been going strong for more than three decades, which is the result of the Martirosyan family’s hard work and love for their home country’s traditional grilled meats. This is the spot for plates of charred and juicy beef, chicken, and lamb kabobs that are cooked to perfection and served with rice, vegetables, hummus, and pita bread.

Old Gyumri: Named after one of Armenia’s largest cities, Old Gyumri serves dependably good fare in private booths. The list of comforting soups and massive salads is complemented by dishes of Icki-bir, a mix of lamb heart and lung barbecue, flame-broiled oxtail khashlama, beef kufta, and an array of kabob sandwiches to wash down with tarragon lemonade or tahn (a salty yogurt drink).

Papillon Bakery: Each of the multiple locations in Hollywood and Glendale takes pride in serving classic and modernized versions of perfect Armenian snacks and Soviet-inflected delicacies. Customers from all over LA come back for freshly-baked batches of doughnuts called ponchiks and the baked Armenian pizza (a thin piece topped here with minced meat, minced vegetables, a number of herbs, and earthy spices). There’s also a wide variety of sweet cakes and savory perashkis, elongated dumplings stuffed here with potato, meat, and cheese.

Sahag’s Basturma Sandwich Shop: Many know to stop at this Anthony Bourdain-approved spot for a bite when passing through the heart of Hollywood’s Little Armenia. Since 1987, this small mom-and-pop deli has been dishing out hearty creations like soujok (Armenian sausage), maanek (Lebanese sausage), and filet mignon. The beloved basturma (seasoned, air-dried cured meats) are sliced paper-thin by Harry Tashyan, who’s continuing his family culinary legacy. Grab one to go.