Many Americans agree on the fundamentals of a classic Thanksgiving dinner: turkey, stuffing, and at least one starchy side. Pie is non-negotiable. Booze will invariably flow. Yet whether that bird is roasted or fried, whether you call it dressing or stuffing, or whether your grandma’s yams skew savory or sweet […]

Many Americans agree on the fundamentals of a classic Thanksgiving dinner: turkey, stuffing, and at least one starchy side. Pie is non-negotiable. Booze will invariably flow.

Yet whether that bird is roasted or fried, whether you call it dressing or stuffing, or whether your grandma’s yams skew savory or sweet depends on where you’re sitting down to dinner. And debates over which regional Thanksgiving menu is the most classic will probably rage for as long as there’s a fourth Thursday in November. At least in the contiguous United States.

Thanksgiving in Hawaii looks different. Poke, sashimi, and poi are likely to grace the table. Macaroni salad is more popular than green bean casserole. And pineapple may well be served in place of cranberry. Even the fundamentals that anchor both mainland and island menus are imbued with Hawaii’s distinct history, climate, and rich culinary heritage.

From a show-stopping bird that gets buried underground to pumpkin pie like you won’t find elsewhere, these local, multicultural dishes put a delicious spin on the Thanksgiving classics.

In Hawaii, festive meals revolve around underground ovens called imus. People dig large pits, build a fire at the base to heat lava rocks, line the pit with banana and ti leaves, and cover the oven with dirt and sand to create a low-and-slow steamer used to prepare everything from whole pigs and fish to taro and breadfruit. Travelers may recognize kālua pig as the typical lūʻau centerpiece, though the term kālua refers to any food that’s been baked underground in an imu.

Much like on the mainland, turkey takes center stage at Hawaiian Thanksgiving feasts. Kālua turkey, that is. In an article for the Washington Post, Sara Kehaulani Goo describes the “island-style” holiday staple as not only delicious and nostalgic but also significant, noting how it “marries Hawaiian culture with an American tradition.” According to Goo, once the meat is separated from the bone and shredded until it resembles pulled pork, kālua turkey should be served alongside “short-grain rice to offset the saltiness.”

Others abide by different rituals. For writer Lanai Tabura, family tradition dictates that kālua turkey be stuffed with Portuguese sausage and seasoned with Hawaiian salt before being buried. Some recipes incorporate brines made from pineapple juice and soy sauce. And while most islanders will agree there’s nothing like a proper kālua turkey, plenty of families take an easier approach, opting to use liquid smoke and an indoor oven to approximate the flavor. 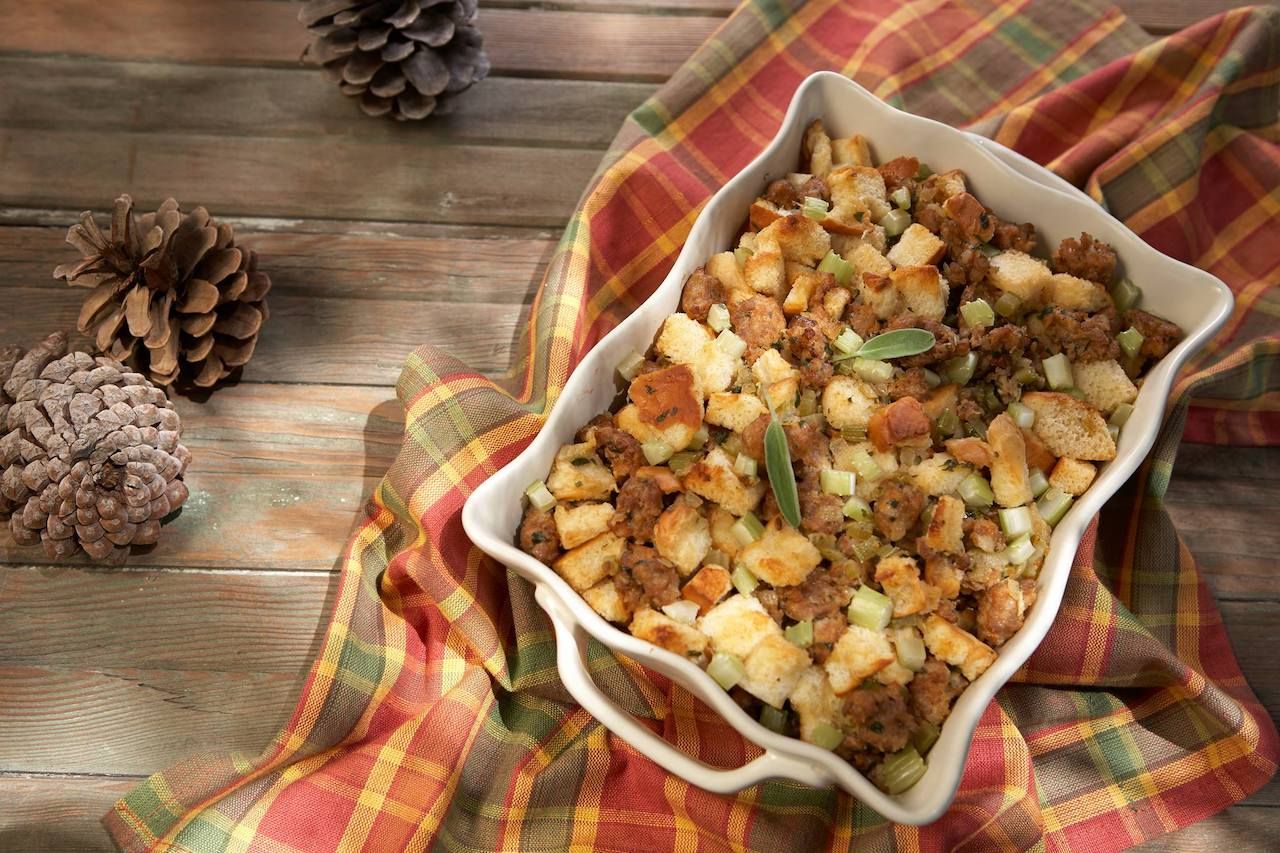 Stuffing may be the most divisive Thanksgiving dish. At the very least, its ingredients list is among the most variable. Some swear by French bread and oysters. Others favor cornbread and bacon. Add in fresh or dried fruit, assorted nuts, other proteins, and a pantry full of herbs, and it’s easy to see how every family has its own idea of what stuffing should be.

In Hawaii alone, there are at least three iterations of the indispensable dish, each of which showcases the state’s culinary heritage. Pork sausage pops up in most stuffing recipes, with some calling for lap cheong and others linguiça, which were brought over from China and Portugal, respectively. Immigrants are credited with introducing both ingredients to Hawaii around the 19th century: Chinese immigrants brought Cantonese cuisine, bringing not only dim sum and noodle soup to the island, but also the smoky and sweet dried sausage known in Cantonese as lap cheong. Meanwhile, Portuguese immigrants introduced linguiça, a mild pork sausage, to the local cuisine alongside foods like salted fish and sweet bread.

Portugal’s influence on Hawaiian baking is also evident in the state’s obsession with sweet rolls, another ingredient that can be used to make stuffing. In the 1950s, Japanese-Hawaiian baker Robert Taira launched Robert’s Bakery, selling loaves of Portuguese-inspired sweet bread that would become the foundation of the beloved King’s Hawaiian brand. According to a recipe on the King’s Hawaiian website, the Original Hawaiian Sweet Bread can be combined with cornbread stuffing, Portuguese sausage and pork sausage roll, onions, celery, apples, and chicken broth to create a Thanksgiving-ready stuffing worthy of kālua turkey.

The side: Okinawa sweet potatoes 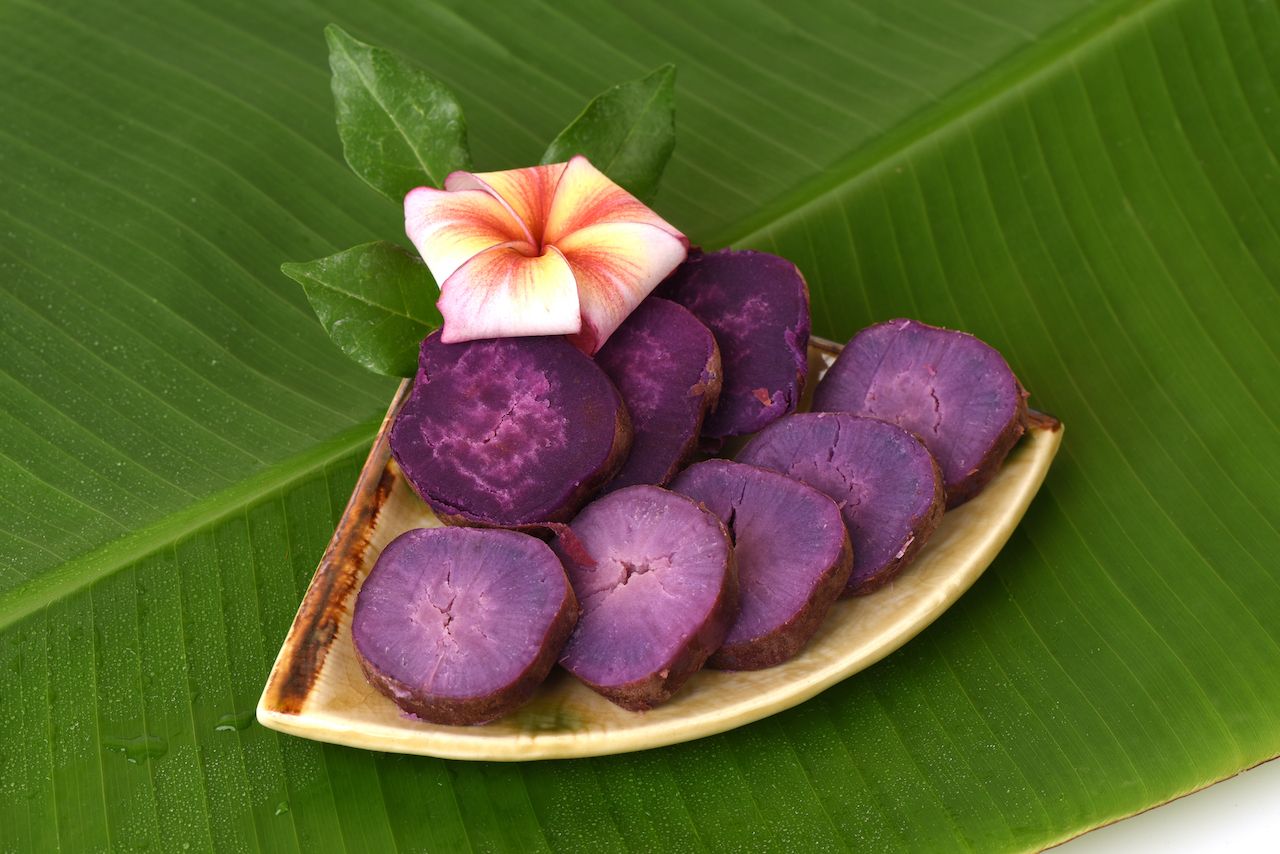 Bright orange sweet potatoes make an appearance on most mainland Thanksgiving tables, with or without the controversial marshmallow topping. Sweet potatoes feature on holiday menus in Hawaii, too, albeit with a colorful twist: They’re probably bright purple.

The story behind these purple potatoes traces back to Central and South America, where sweet potatoes originated. Though European explorers from the Columbus era are often cited as introducing the root vegetable to the New World, anthropologists have found evidence that Polynesians acquired sweet potatoes from the Americas hundreds of years prior, around 1000 AD, according to NPR. It was not until the root veggie made its way to Japan that the purple color was cultivated on Okinawa island, however. Polynesians later brought this purple sweet potato to Hawaii where it has flourished in the volcanic soil ever since.

Okinawa sweet potatoes are central to the Hawaiian diet year-round, so much so that they’re now known as Hawaiian sweet potatoes across the islands. Thanksgiving preparations vary, from casseroles and soups to simple mashed, roasted, or steamed dishes. Purple sweet potatoes may also be used to make lau lau, a classic Hawaiian dish made of ti-leaf-wrapped pork and butterfish. Lau lau is commonly served at lūʻaus, as well as holidays like Thanksgiving. 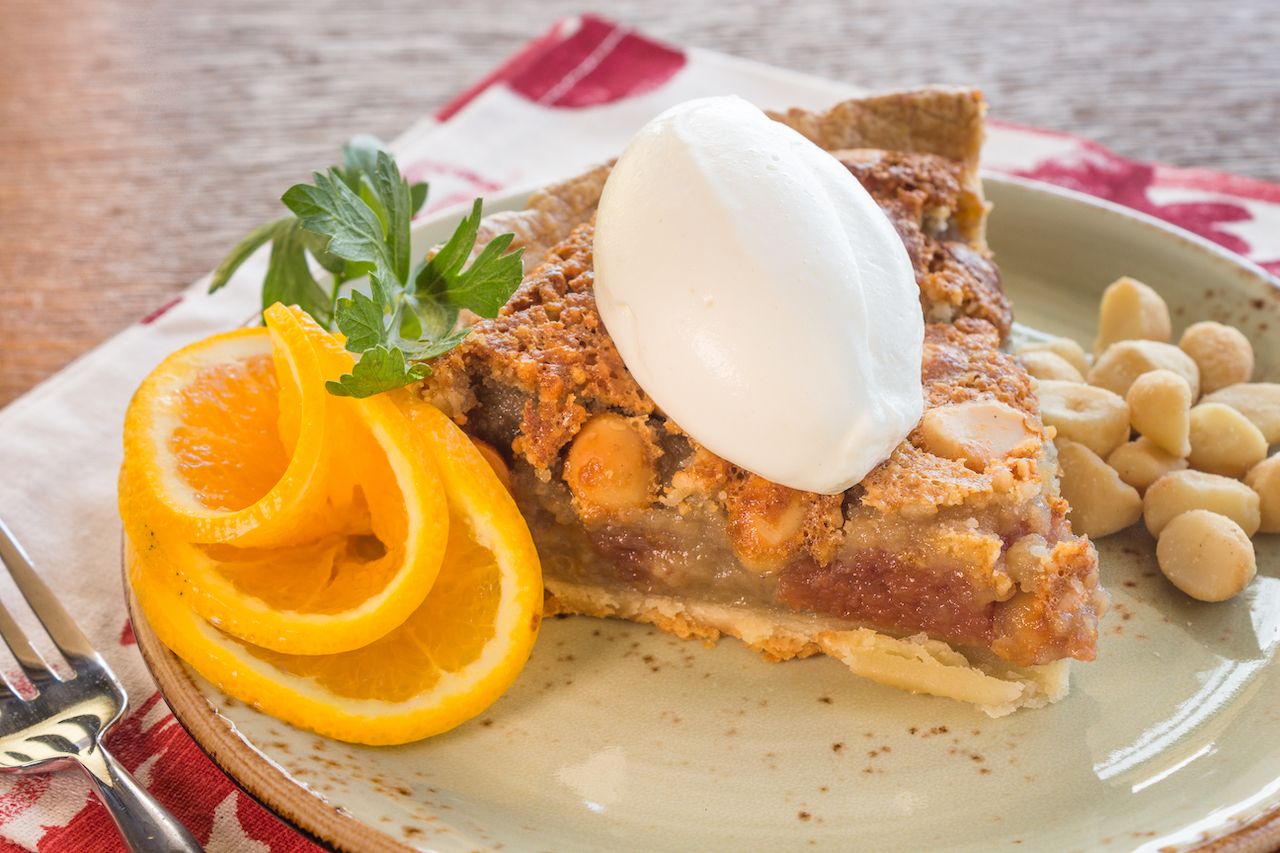 Pumpkin or pecan: Everyone has an opinion on the ultimate Thanksgiving pie.

Both pumpkin and nut fillings make for popular holiday pies in Hawaii, though neither looks quite like it does on the mainland. Take pumpkin pie: Eaters will recognize flavors like cinnamon, ginger, and cloves, but many Hawaiians also throw haupia in the mix, lending the sweet treat a coconut-like flavor. A popular dessert in its own right, haupia is a gelatinous pudding made from coconut milk and arrowroot or cornstarch, resembling desserts like Italy’s panna cotta and France’s blancmange. When it’s not being mixed with pumpkin puree, haupia might also be blended with chocolate or purple sweet potatoes before being smoothed into a pie crust.

Pecan pie, on the other hand, takes a backseat to macadamia nut pie. After all, Hawaii hosted the world’s first commercial macadamia nut farm after a British plant collector and sugarcane plantation investor by the name of William Purvis introduced the species to the Big Island from Australia in the late 19th century. Today, macadamia nut pie is an all-time island favorite.

Star ingredient aside, recipes for macadamia nut pie are similar to those for pecan pie. Both incorporate corn syrup to get that irresistible, ooey-gooey filling. Should you decide to try this pie at home this Thanksgiving, remember to toast your macadamias for the ultimate nutty flavor.