Shuffling through the Squaw Valley parking lot wearing slightly too-big rental boots, already starting to sweat through my base layer in the late March sun, I heard a voice call out from my left. “Hurry up and hit the mountain,” the voice said, disembodied behind the skis I had slung […]

Shuffling through the Squaw Valley parking lot wearing slightly too-big rental boots, already starting to sweat through my base layer in the late March sun, I heard a voice call out from my left. “Hurry up and hit the mountain,” the voice said, disembodied behind the skis I had slung over my left shoulder. “It’s gonna get slushy this afternoon.”

It was 9:00 AM on a Friday. The parking lot was only half as full as it had been on my last Friday morning ski day in early February, but I hustled to the ticket booth nonetheless. I had my sights set on KT-22, wary of the crowd that might have formed in the hour that the resort had been open, as crowds often do at what’s been called the greatest chairlift in North America. There was no need to rush. What little line there was had already dissipated by the time I reached the gate. I rode the lift twice before even sharing a chair with another skier.

This, I discovered, is among the many joys of spring skiing at Squaw Valley.

Squaw is an obvious choice for any High Sierra ski trip. Terrain like KT-22 has tested the grit of Olympians, as competitors in the 1960s Winter Games and in the decades since, while more than 65 percent of the resort’s 3,600 skiable acres are a playground for beginners and intermediates. The culture is equally inclusive, welcoming both Olympic hopefuls who après as hard as they ride and families who treat The Village like a home away from home.

Come spring, the choice is even easier. While many of its neighboring resorts shutter in April, Squaw has been known to stay open as late as the Fourth of July. This year, it plans to close on Monday, May 31, alongside sister resort Alpine Meadows, making their combined 6,000 acres a prime candidate for a last-ditch Memorial Day weekend ski trip.

Spring skiing is no last resort, however. March and April have some of the deepest snowpack of the season following late-winter storms. As the weather settles, so do the masses, and lift-ticket and lodging costs drop as the daytime temperatures rise. Then there’s the corn. Arguably second only to fresh powder, corn refers to beads of snow resembling kernels that are formed by the melting-freezing cycle of consistently warm days and cold nights. This creates a sweet spot between snow that’s too hard and too slushy. And you’ll only get it during spring.

Making the most of the mountain

As a rule, spring skiers want to follow the sun, moving east to west. I opted to warm up on the East Face of KT-22 before riding the Saddle to the Headwall lift, where I was treated to soft corn on the south-facing Sun Bowl, while my ski buddy lapped the long, gentle Lake View run above the Resort at Squaw Creek. By late morning there was a modest wait for the Headwall lift that was made longer by the blaring sun. Around 10:00 AM is the magic hour for spring skiers when the ice has thawed but the snow has not yet melted into slush. 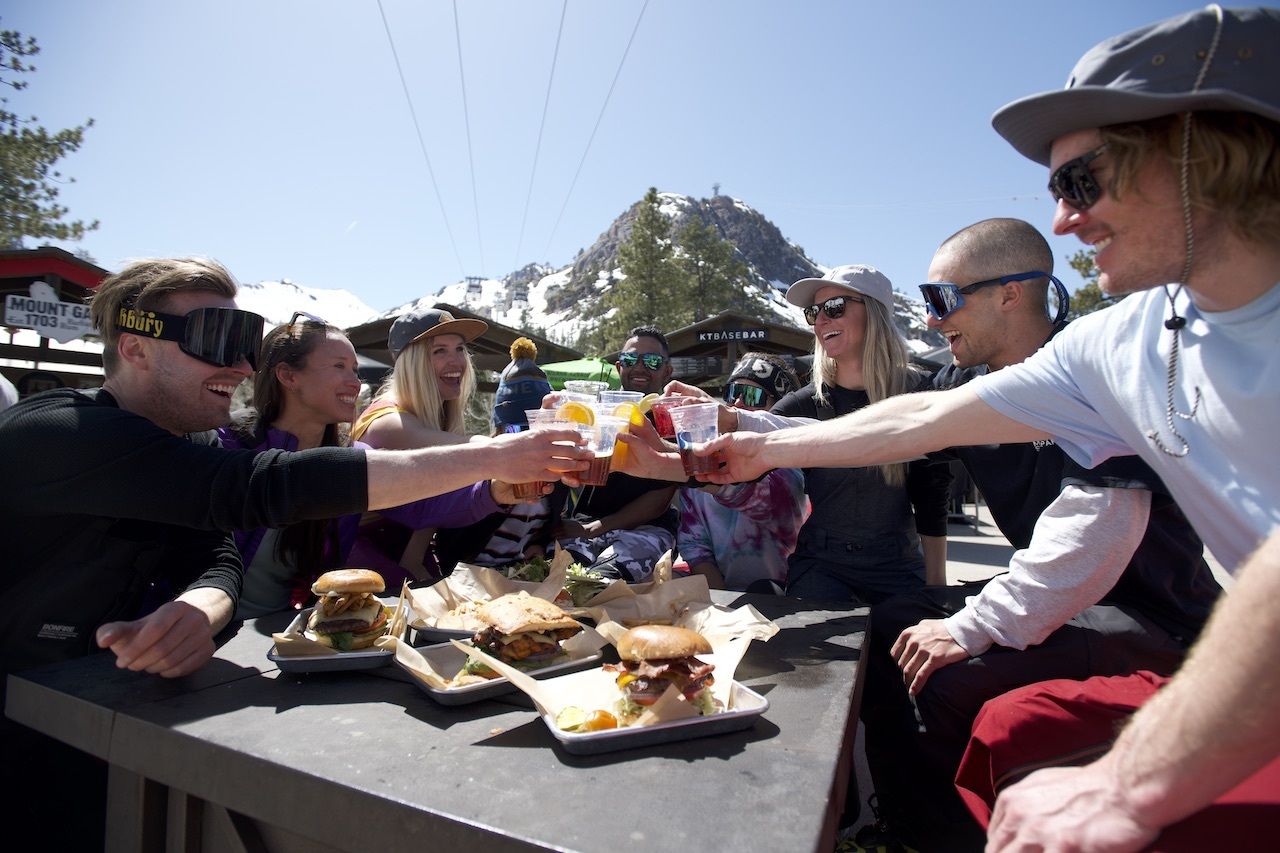 Desperate to shed a layer, I met my companion at the KT-22 Base Bar after a final run down the Headwall face. The patio was lively but not full. Skiers and snowboarders who, like me, had dressed for the morning chill were now sipping beer in their base layers while afternoon riders arrived wearing considerably less. I saw Hawaiian shirts and denim shorts, bikini tops and sports bras. In line for the Gold Coast Funitel en route to the neighboring Shirley Lake and Granite Chief lifts, we even encountered a couple of guys bare-legged under banana costumes, which they explained were part of a mountain-wide game of tag a few friends had organized.

The tallest peak in Squaw Valley at just over 9,000 feet, Granite Chief was the perfect place to ease into the afternoon and evade the stickier snow at lower elevations. Freshly waxed skis and snowboards also benefit spring riders by repelling moisture in warmer weather. Atop the peak, I devised a game of my own, challenging myself to navigate the trees off High Voltage. I’d been too intimidated to stray from the groomed runs during my February visit but felt encouraged by the casual spring atmosphere and lesser competition for terrain. Over at Shirley Lake, there were even fewer skiers to contend with, my ski buddy later told me over lunch at the Gold Coast sundeck, dubbing the moderate 700-foot verticals there the best cruisers she’d skied in years. 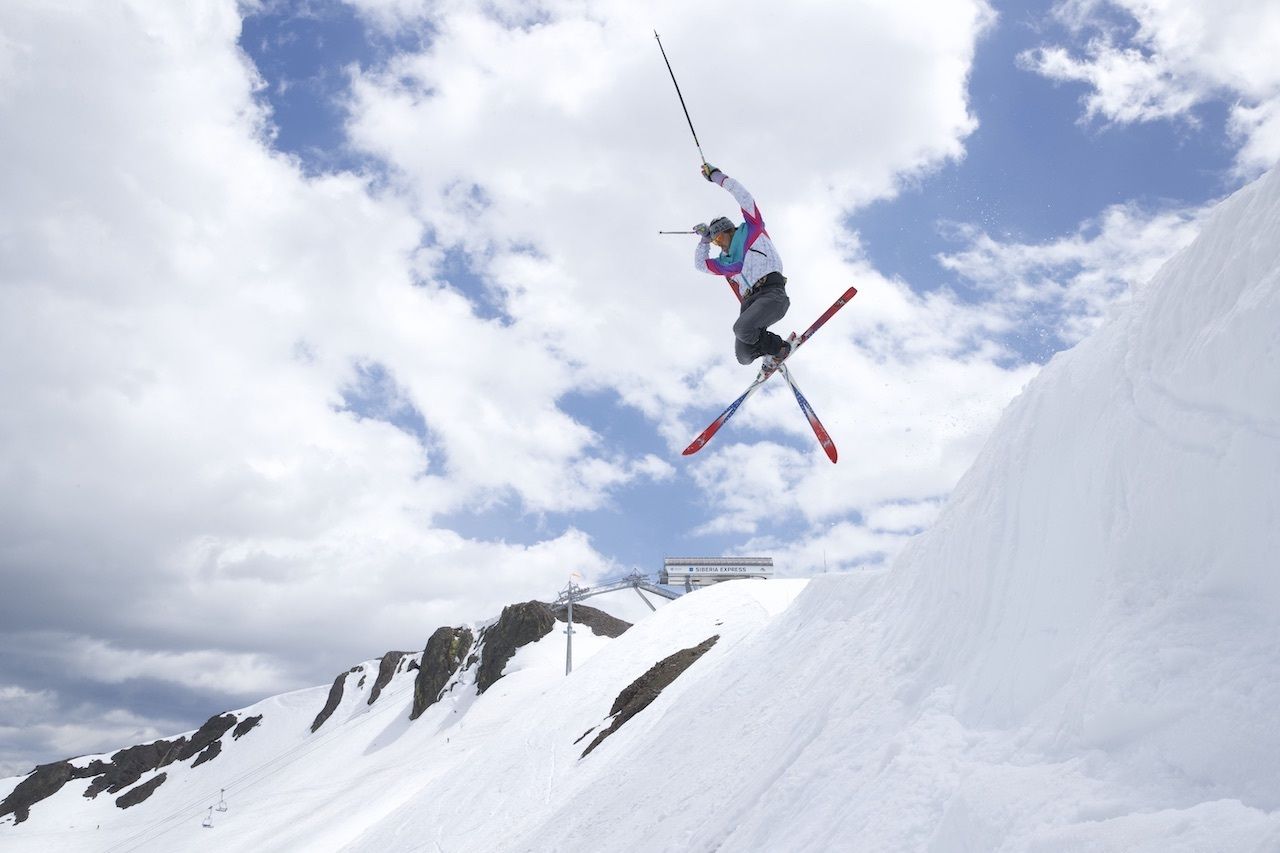 For intermediate skiers, spring is particularly liberating. Whether they’re verging on advanced and emboldened to attempt steeps that have finally accumulated enough snow to be skiable or they’re back in bindings after a long hiatus, as was the case with my skiing companion, the relative absence of other skiers and softer, slower snow make for excellent conditions to improve. Just remember to choose your lines carefully to avoid patches of dirt and rocks, drink lots of water, slather on sunscreen, and gear up with a good attitude.

The case for Alpine Meadows 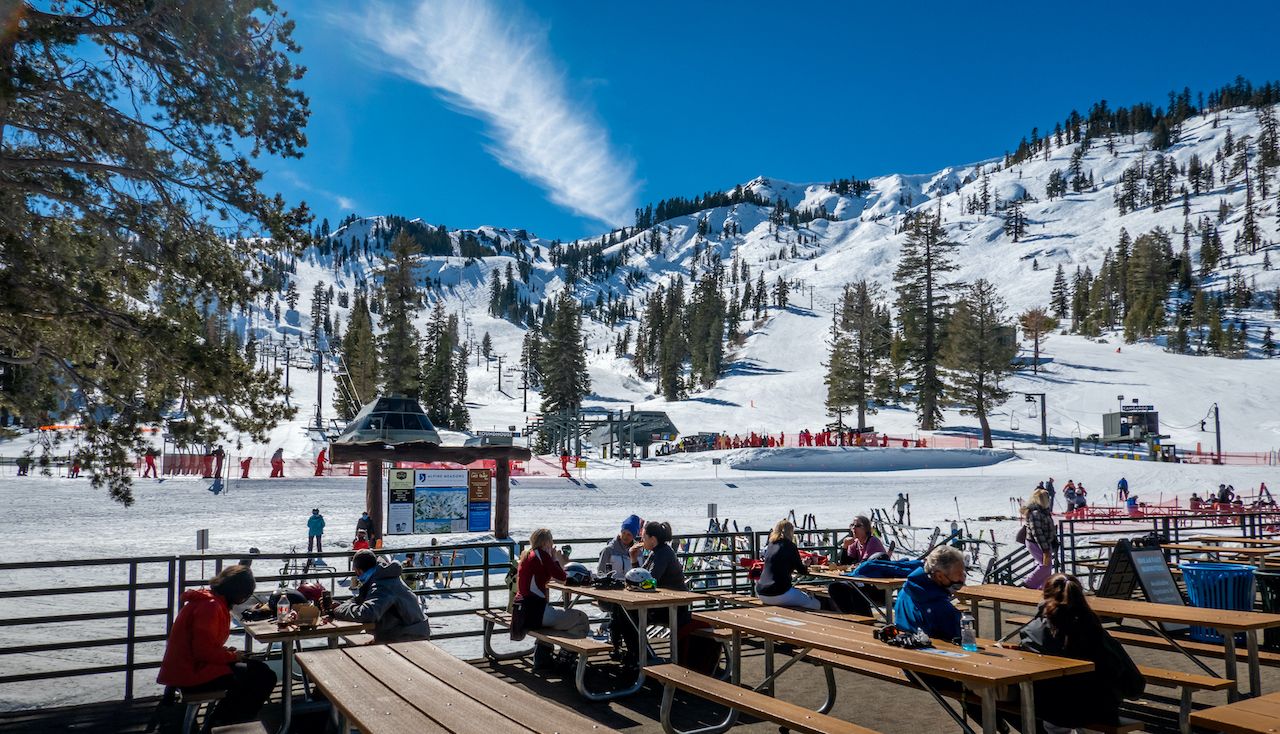 Alpine Meadows was not yet a ski resort when Squaw Valley rose to international fame as the host of the 1960 Olympics. It opened a year later, and in 2012, the resorts merged to offer lift-ticket holders access to both. All these years later, Alpine still lacks Squaw’s name recognition, which is among its greatest strengths during peak season.

While spring skiers need not worry about peak-season crowds, Alpine is a boon on busier days like Easter weekend and spring break. Of course, the mountain itself has draws that make it a local favorite. Several of the Squaw staff I spoke with cited its hike-to back bowls and expert terrain as their preferred day-off stomping grounds. For advanced skiers, the trek to Sun Bowl and steep, cliffy Scott Chute came highly recommended.

On both of my recent Tahoe trips, in February and March, I chose to wind down with a half-day at Alpine before driving back to San Francisco. The meandering runs off the Treeline Cirque and Sherwood Express lifts were particularly suited to the Saturday morning I spent cruising the spring snow. It felt like a walk in the woods, complete with screensaver-quality views of Lake Tahoe at every turn. My skiing companion, who’d called it quits early that day but had enjoyed having the mountain almost entirely to herself on a mid-week visit, soaked up the rays in an Adirondack chair on the sundeck like it was a day at the beach. 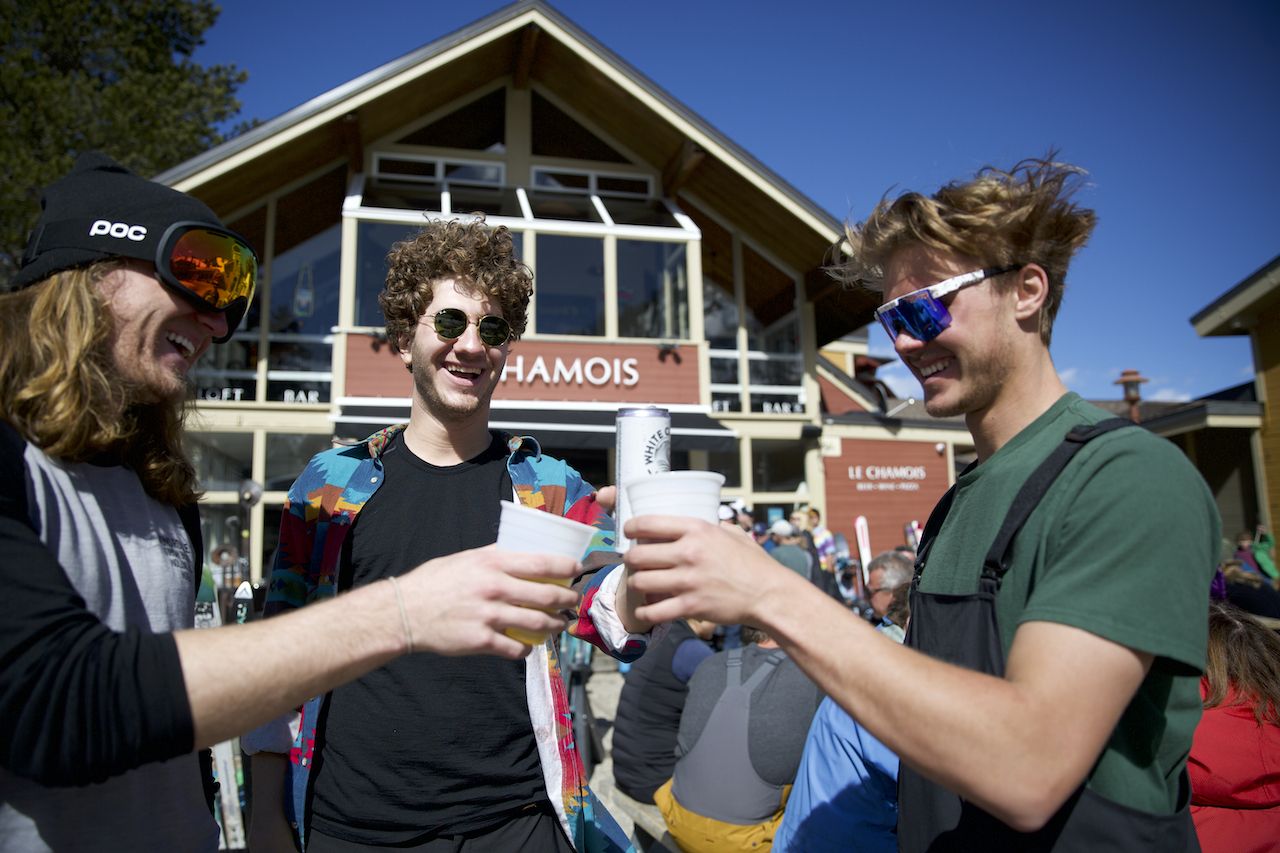 As we walked back to our car around noon, the parking lot had transformed into a tailgate, with riders cracking beers straight out of their trunks. It was not the legendary après scene I’d heard about at Squaw’s Le Chamois, but it matched my experience of the mountain: unfussy, tame, and full of good cheer. I may be a Squaw skier at heart, but as spring trips go, it’s hard to say which resort I enjoyed more. The great news: With access to both, there’s no need to choose.

Staying active off the slopes 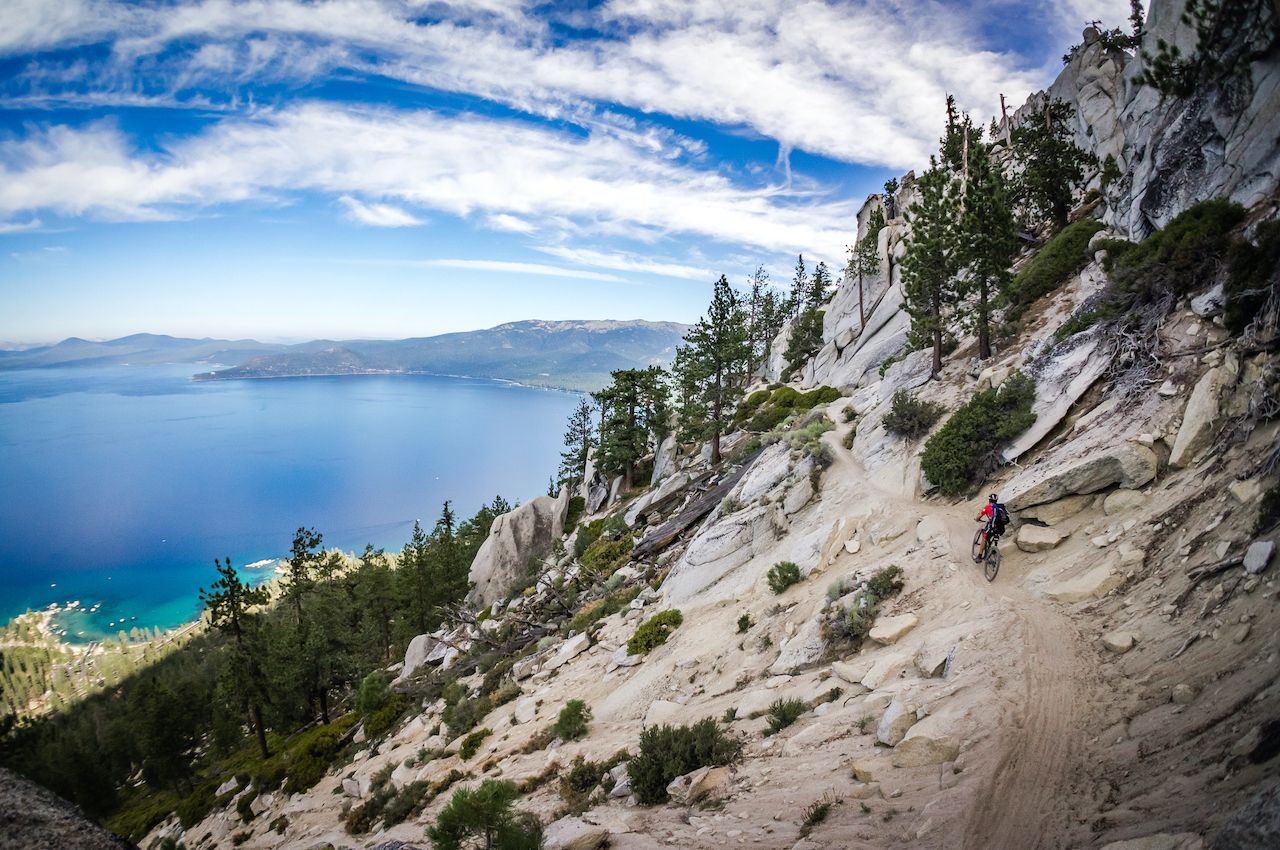 Ski trips are rarely just about skiing. There’s the après ritual, of course, but also a world of recreation off the slopes. For visitors to Squaw Alpine, that world is the Tahoe basin.

Lake Tahoe is as much a summer destination as a snowy dreamscape. In spring it can feel like both: You can wake up to winter and be barbecuing in short sleeves by the afternoon. This makes spring the ultimate season for multi-sport athletes. During our March trip, the members of my group who opted not to downhill ski spent their days hiking and mountain biking around Olympic Valley and donning a different type of skis at the Tahoe Donner Cross Country Ski Center. As the season advances, visitors can make the most of Lake Tahoe by boating and paddleboarding, even sunbathing on the shore at Kings Beach.

And as much as I enjoyed huddling around the fire pit at the Auld Dubliner pub in The Village during my February visit, nothing beats outdoor dining when it’s warm enough to hold a fork glove-free. Whether you’re staying at Squaw Valley or renting a house in nearby Tahoe City or Truckee, by March the patio scene is in full swing to keep you energized for the day’s activities — which when spring rolls around means just about anything you could hope to do in Tahoe.

Editor’s note: Squaw Valley Alpine Meadows is in the process of changing its name due to the derogatory nature of the term “squaw.” The resort is consulting with Native American groups and the local community and plans to announce its new name later this year.