It’s been nearly a year since the pandemic transformed queer life in New York City. Crowded clubs and live performances are now quarantine-bubble gatherings and virtual events. Gay-bar mainstays like 9th Avenue Saloon and Therapy shut their doors for good while other institutions that have been lauded for creating safe LGBTQ spaces remain on life support. At a glance, the city’s queer landscape seems to be vanishing — unless you know where to look.

At the Whitney Museum of American Art, you can lose yourself in the warm glow of a gay bar. The Fotografiska Museum saves you a sunny spot at Jacob Riis Beach. A visit to the exhibit at The Watermark in Brooklyn Heights feels like having — and spilling — tea with your LGBTQ elders. These art shows, along with a robust roster of other queer-centric exhibitions in NYC this year, are the new go-to spaces for LGBTQ New Yorkers desperate for a socially distant kiki in the time of COVID.

Circuit parties are still out, but New York’s museums are in, so if you’re craving queer community, buy yourself a timed-entry ticket to one of the following exhibits and support the institutions celebrating LGBTQ lives in 2021.

Artists Elliot Reed, E. Jane, and Naudline Pierre use performance, painting, and new media to explore the intersection of Blackness and queerness in “This Longing Vessel,” playing until March 14 at MoMA PS1 in Queens. In Reed’s “Duets,” audience members can watch the artist as he improvises with a special guest. Live footage is streamed on the museum’s Instagram page; the final duet airs on March 6. Naudline Pierre’s medieval-style paintings are self-portraits mixed with fiery spiritual visions. E. Jane uses video installations to celebrate the concept of the Black diva.

Gregg Bordowitz’s “I Wanna Be Well” will take over on May 13. The exhibit explores Bordwitz’s identity as a gay Jewish activist and artist during the ongoing AIDS crisis.

2. “How Will I Know” — Salmon Toor, The Whitney Museum of American Art

The cartoonishly cute and lanky queer boys who star in Salmon Toor’s paintings meant to make their Whitney debut this past March, but due to the pandemic, audiences didn’t meet them until November. In that time, Toor’s show, entitled “How Will I Know,” took on new meaning. In “Bar Boy,” a man stares into the absinthe-green glow of his phone, oblivious to the queer couples around him. “Stoop” shows two mask-free men snuggled at the entrance to an apartment building. “Four Friends” celebrates a queer crowd dancing and drinking with abandon inside a tiny apartment. These scenes might’ve seemed banal before last March; now, they’re like sweet pre-pandemic nostalgia.

What makes Toor’s show even more evocative than its treatment of queer intimacy is its understanding of isolation. In one painting, the tension between family members at a dinner table is thick enough to slice; in another, a nude man falls asleep while staring at a laptop, alone.

Toor, a Pakistan-born resident of the East Village, centers Brown men in his paintings — a group often invisible in mainstream queer culture. Here, they’re not only the center of attention but the objects of our affection. There’s a sense in “Bar Boy” that if you stare long enough, the main character in Toor’s painting might look up from his phone, notice you, and smile.

“How Will I Know” runs until April 4. Julie Mehretu, a lesbian artist known for her large-scale abstract paintings, will be featured in an exhibit from March 25 to August 8.

The Leslie-Lohman Museum of Art is considered the world’s first queer art museum. It all began in 1969 when partners Charles Leslie and Fritz Lohman held their first “Exhibition of Homoerotic Art” in a Soho loft. Two decades later, the Leslie-Lohman Gay Art Foundation was created, and in 2016, the collection officially became a museum. Located on a graffiti-drenched corner of Wooster Street, the museum hosts a series of provocative exhibits throughout the year and is always worth visiting.

“Show and Tell,” on display until May 9, celebrates over three decades of photography taken by the late Laura Aguilar. In her most powerful pictures, Aguilar dissects her identity as a large-bodied Chicana lesbian by becoming the subject of her work. “Dissolution,” on display until May 25, features contemporary pieces created by emerging queer artists from the Leslie-Lohman Museum Artist Fellowship.

4. “Not Another Second” — Karsten Thormaehlen, The Watermark in Brooklyn Heights 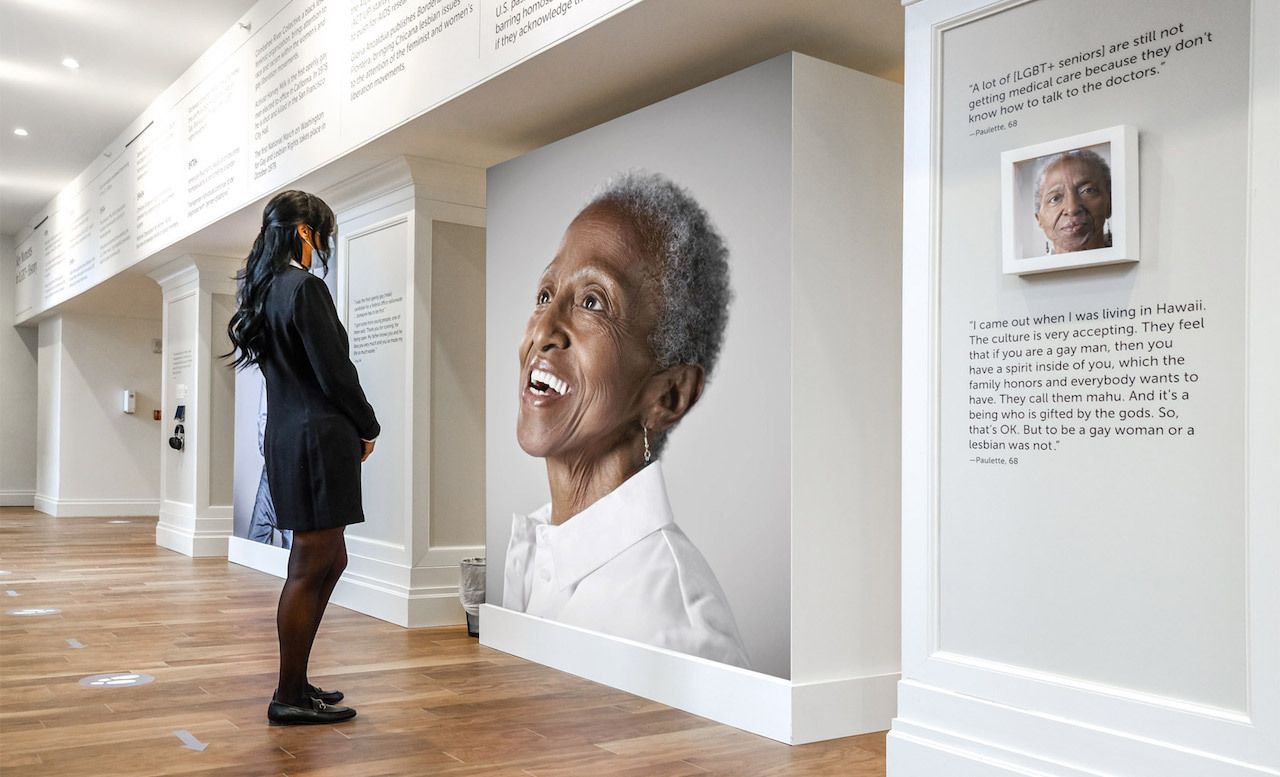 Photo: Not Another Second

Twelve LGBTQ seniors. Nearly 500 collective years lost while hiding their lives due to discrimination. This is the subject of German photographer Karsten Thormaehlen’s “Not Another Second,” a photography and film exhibit currently on display at The Watermark in Brooklyn Heights (the building also happens to be a senior living center). Through a series of interviews shared with AR technology, visitors get to experience the emotional journeys of individuals who lived through monumental moments like the Stonewall Uprising and the AIDS crisis and helped usher in freedoms enjoyed by a new generation.

According to the exhibit, roughly 60 percent of LGBTQ seniors report feeling a lack of companionship, and more than half report feeling isolated from others. These intimate tales serve not only as a celebration of LGBTQ resilience but as a reminder to consider the struggles our elders continue to face, particularly in light of the past year.

“Not Another Second” is free to the public, with in-person showings every Tuesday, Thursday, and Saturday through May. You can schedule a time ticket reservation on the Watermark’s reservation page.

Patrick Angus (1953-1992) came of age as a gay man and an artist during the last major health crisis to strangle New York City — the AIDS epidemic. His paintings, including interiors of an all-male burlesque theater in Times Square (the Gaiety), drip with the erotic desire of a community in chaos. In “Hanky Panky,” a group of men sit safely spaced while watching an adult film, careful not to touch one another. Angus serves as an observer, never a participant — sketching his subjects from a distance. As a result, there’s a sense of loneliness in his paintings — one that’s all-too-familiar as the current pandemic continues to upend LGBTQ life as we once knew it. The exhibition will be on display at the Bortolami Gallery in Tribeca through February 27. 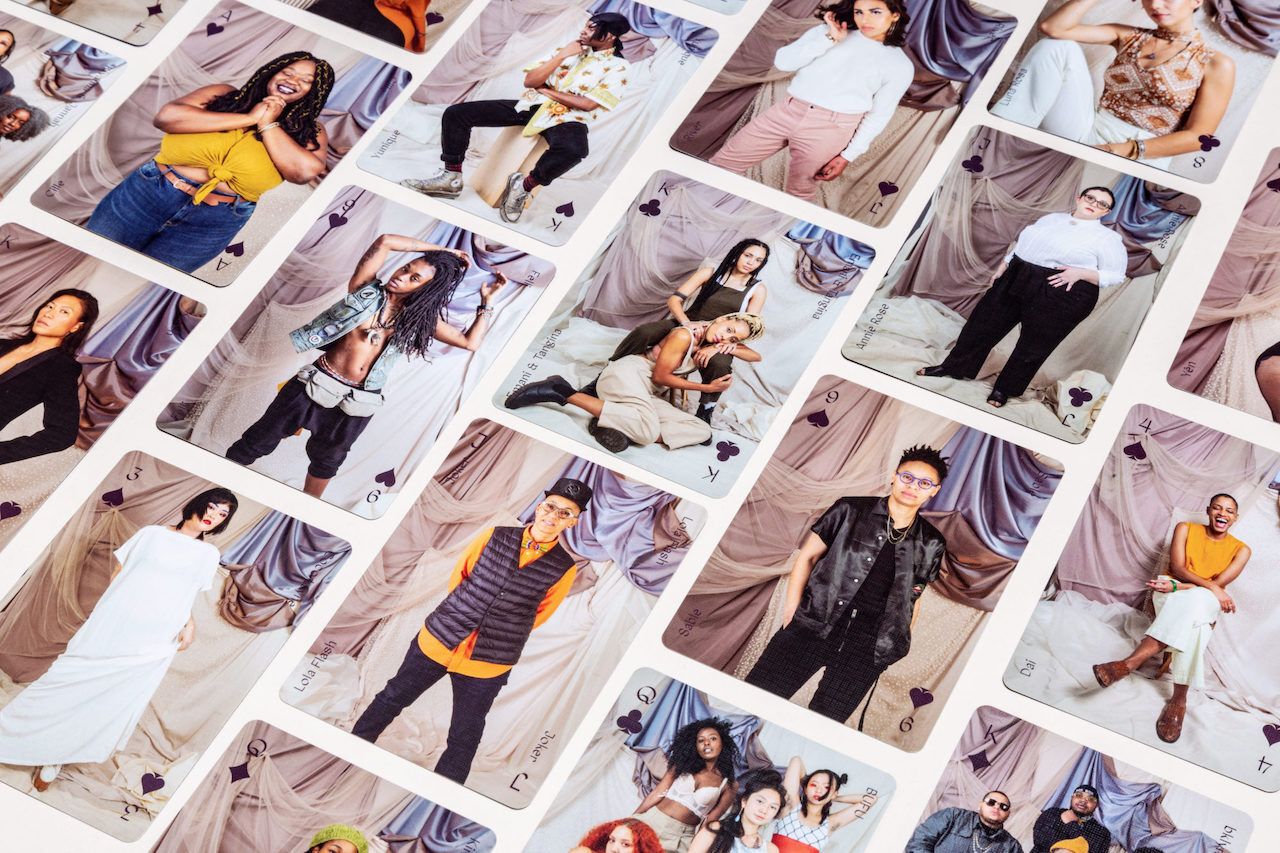 The Fotografiska Museum is located in a former church on Park Avenue South, but Naima Green’s exhibit makes it feel like you’re in a queer Brooklyn enclave. “Brief and Drenching,” her three-part exhibit, begins by introducing audiences to a community of people who identify as queer, trans, non-binary, and gender non-conforming through a series of studio portraits. Next, we go on a voyeuristic spin around the artist’s apartment. Finally, we meet a group of friends sunning at the LGBTQ-centric Jacob Riis Beach. Green focuses her camera lens on Black and Brown lives, handling each subject with the gentle care of a best friend. It’s the closest New Yorkers will likely get to a gayborhood block party until winter passes.

“Brief and Drenching” runs until April 18. Visit the museum’s website to purchase tickets.