How to bike the Pan-American Highway

The thin air of the high Andes made cycling even relatively flat ground surrounding Lake Titicaca difficult to traverse. At 12,500 feet in elevation, crossing terrain that would be an easy pedal closer to sea level takes an immense amount of energy. After slowing to catch my breath, I glanced […]

The thin air of the high Andes made cycling even relatively flat ground surrounding Lake Titicaca difficult to traverse. At 12,500 feet in elevation, crossing terrain that would be an easy pedal closer to sea level takes an immense amount of energy. After slowing to catch my breath, I glanced up ahead. I could see the arch I would soon pass under as I left Peru behind for new adventures in Bolivia. Approaching the arch, I leaned my bike against the customs building and went inside.

I quickly found myself in front of the officer who would stamp my passport and — if all went well — grant me entrance to Bolivia. I held a tense breath as the officer counted on his fingers to determine if I overstayed the 90 days allowed by my visa. He stopped counting at 82 days, en route from Alaska to the tip of South America along what’s known as the Pan-American Highway, a 19,000-mile hemisphere-spanning route. My relief was visible as he proceeded to stamp my passport.

Taking a lifelong passion for cycling to the next level

I’ve been big into cycling for most of my 35 years. From a young age, I found freedom in being on two wheels. And that feeling is something that has persisted, if not grown with me, into adulthood. The idea of traveling long distances and camping along the way had always been on the periphery. After graduating from university in 2012, I took my first long bike trip across the western United States.

It being my first-ever bike tour, I was incredibly nervous. I had never attempted anything like this before. On this trip, I learned what it meant to stealth camp (the process of camping at unmarked backcountry spots), how to pack, what NOT to pack, and how to push myself beyond what I thought was possible. I got to explore the western states at my own pace and by my own power. I felt empowered and liberated. While I made many mistakes along the way and suffered through wind, rain, and pain, I was hooked.

I started planning my next big trip almost immediately upon returning and eventually settled on cycling the entire Pan-American Highway from Prudhoe Bay, Alaska, to Ushuaia, Tierra del Fuego, Argentina — a trip that would take me to places I had never heard of over the better part of two-and-a-half years. En route, I would cross nearly every type of geographic setting, across towering mountains and through major metropolises, twice crossing US-Canada borders before pedaling south through the plains east of the Rockies towards Mexico.

In the years leading up to my departure, I spent countless hours researching places I wanted to go, things to avoid, and what documents and preparation I would need to cross the borders into 17 different countries. In addition to the US, Canada, and Mexico, the Pan-American Highway passes through the whole of Central America, crosses continents into Colombia, and heads down the western edge of South America through Ecuador, Peru, and Chile before cutting east into Argentina.

In total I’d experience seasons on both ends of the global spectrum — summer in Alaska and summer in Patagonia, with winters ideally spent in warmer climes. Though, as I’d see firsthand, much as the sun shines on Mexico year-round, the snow lives in the high country at all times, and weather can come out of seemingly nowhere to disrupt what I’d expected to be a smooth day.

I finally set out on my adventure in the summer of 2017.

Embarking on a country-hopping cycling journey 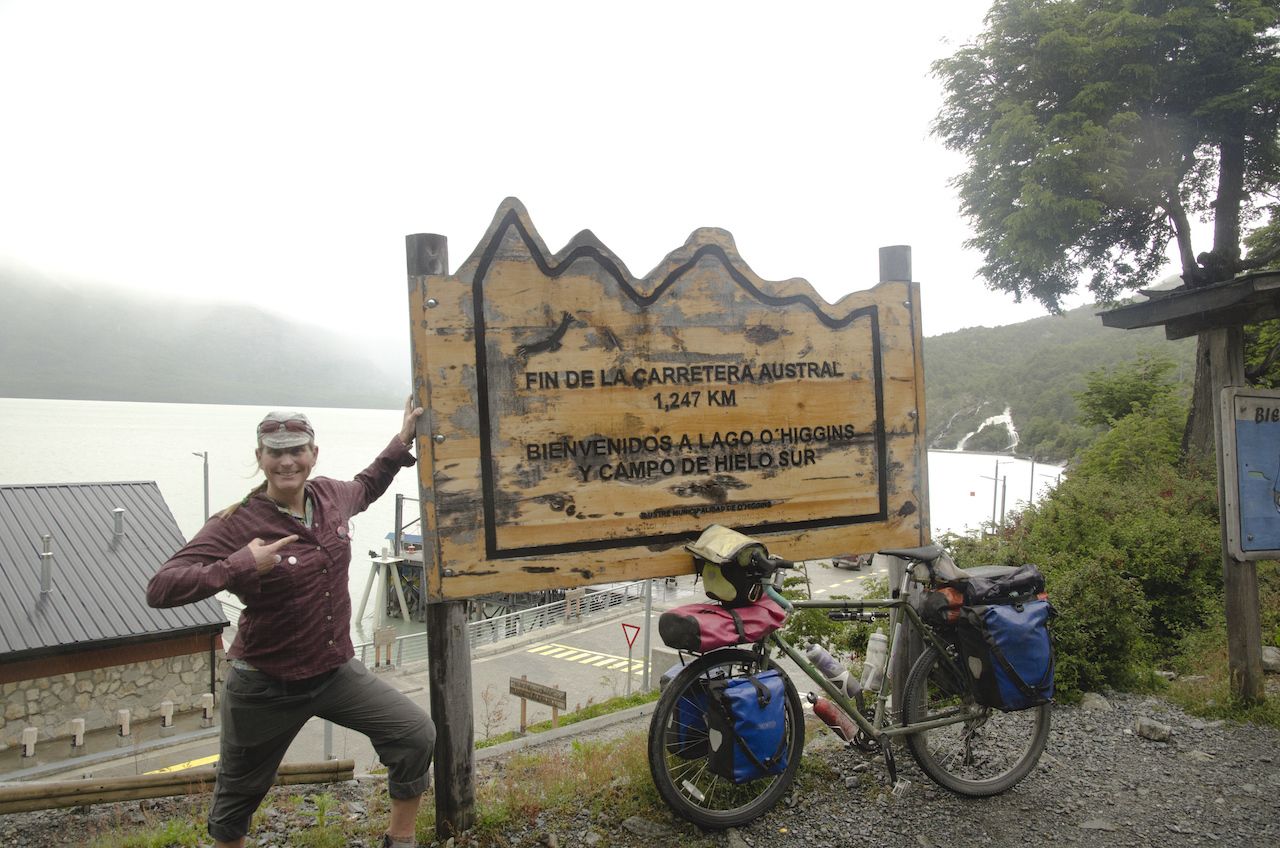 Planning for a trip like this doesn’t stop once your adventure begins but continues non-stop as you progress in your travels. My route was never fixed. Every night I would look at my maps, both digital and paper, searching for areas to camp the following day, places to refill food and water, and cool landmarks to view or learn a little about the local history. I would often choose several camping spot options, one at a shorter and longer distance so I could easily adjust my daily plans based on weather, my energy levels, and my overall desire to “try hard” on any given day. Giving my body enough time to acclimate to the daily grind of pedaling for eight to 12 hours, day-in and day-out in the wind and rain, up mountains, and through clouds of mosquitoes, was imperative.

Cycling across the Andean plateau I’d experience moderate weather in the Altiplano (high plain) and pass through Boreal forest and past Patagonian lakes. The ability to shed a layer (or add one) would be imperative, as would having waterproof options and a rain fly for the tent. Still, I learned early on that I packed too much and needed to adjust the placement of things.

Knowing what food to bring on a short trip is not all that different than in a large one; while the allotted budget may be different, the goal of carrying just enough to get by stays the same. Preparing your food for a trip this large is not something that you can really do once and then stick to for the entire trip. You have to account for variations in the seasons and regions you are visiting. When I was in Alaska and the Yukon, I would routinely have to carry multiple days’ worth of food at a time because distances between towns are far greater there than in more densely populated areas.

My diet consisted mainly of eating boxes of Pop-Tarts for their high sugar and calories during my daily rides and a bag of pasta for dinner with a box of Cheez-Its for dessert. This persisted until I reached Mexico and began to supplement my energy at the many roadside taco stands. For much of the trip I was able to get by carrying only enough for one or two meals at a time because I could replenish my supplies as I rode for the day. 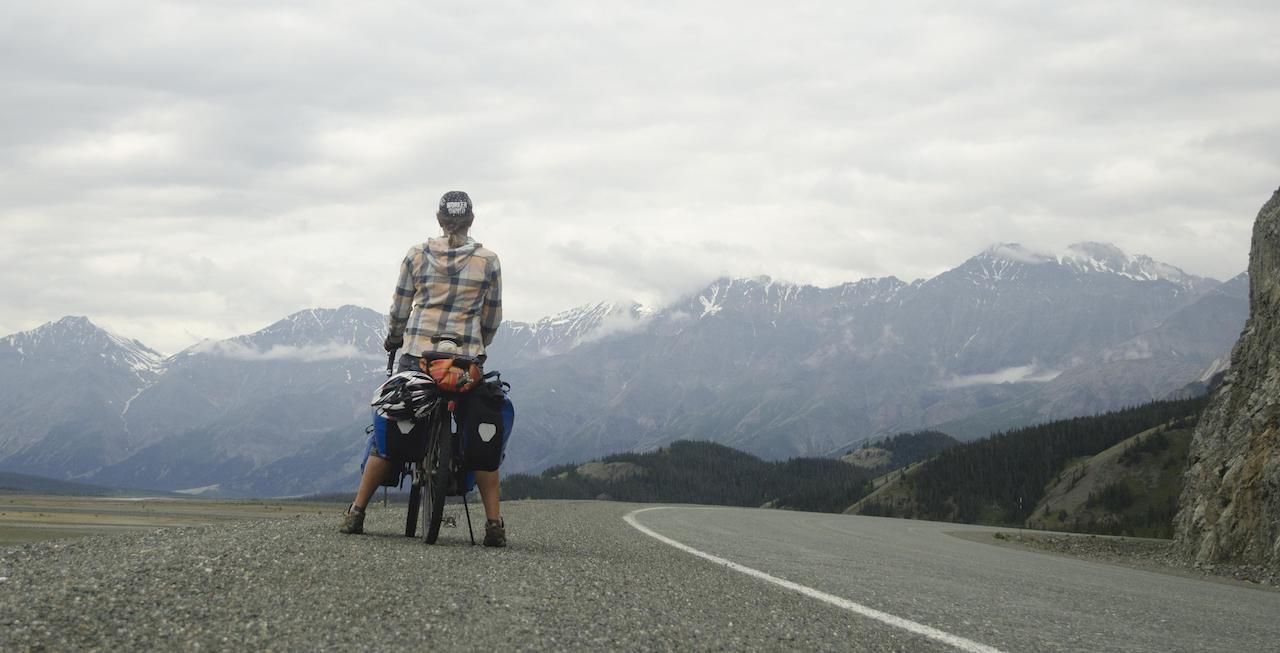 For the most part, the administrative part of crossing borders by bicycle is the same as in a vehicle or arriving via air. After spending a month exploring Alaska I neared Canada and had my first experience with this. The most complicated thing about this border was giving away the marijuana I had on me and couldn’t legally transport across the international boundary. This first jaunt across borders was easy, helped by friendly relations between the two countries.

In my case along the Pan-American Highway, the majority of border crossings were as easy as this first one. I would bike up to the building, get in line, get stamped out, bike a few meters into the next country, get stamped in, and proceed on with my day. Until I reached Bolivia, the most time I had spent changing countries was about an hour.

There, in the high Andes gasping for oxygen, was when my luck finally ran out.

Getting out of Peru had proved easy enough. After I passed underneath the arch into Bolivia and made my way to customs, I had a feeling that I was in for an interesting ride. In researching the trip, I had learned that I would need somewhere around $200 to buy my visa-on-arrival for Bolivia, and I was prepared to spend that much. But it turned out that was not all I needed.

The customs official wanted to see proof of a return flight to the US (which I didn’t have) and a reservation and address of the hotel I was staying in during my visit. I learned the hard way that writing in “wild camping” doesn’t count — I tried. After some negotiation and a fair amount of frustration, I was introduced to a man named Juan who would prove to be exactly the person I needed to meet. Not only was he able to take and print my official photo for my visa, but he also helped me reserve a hotel room and book a flight home while spending less than 15 Bolivianos (just over $2). I went back to the customs office and was swiftly given a visa and stamped into the country, thus ending a few tense hours in between countries.

Lesson learned: Research diplomatic relations between two border countries — and your home country — beforehand, and know which countries require visas for entry, and any proof of reservations. 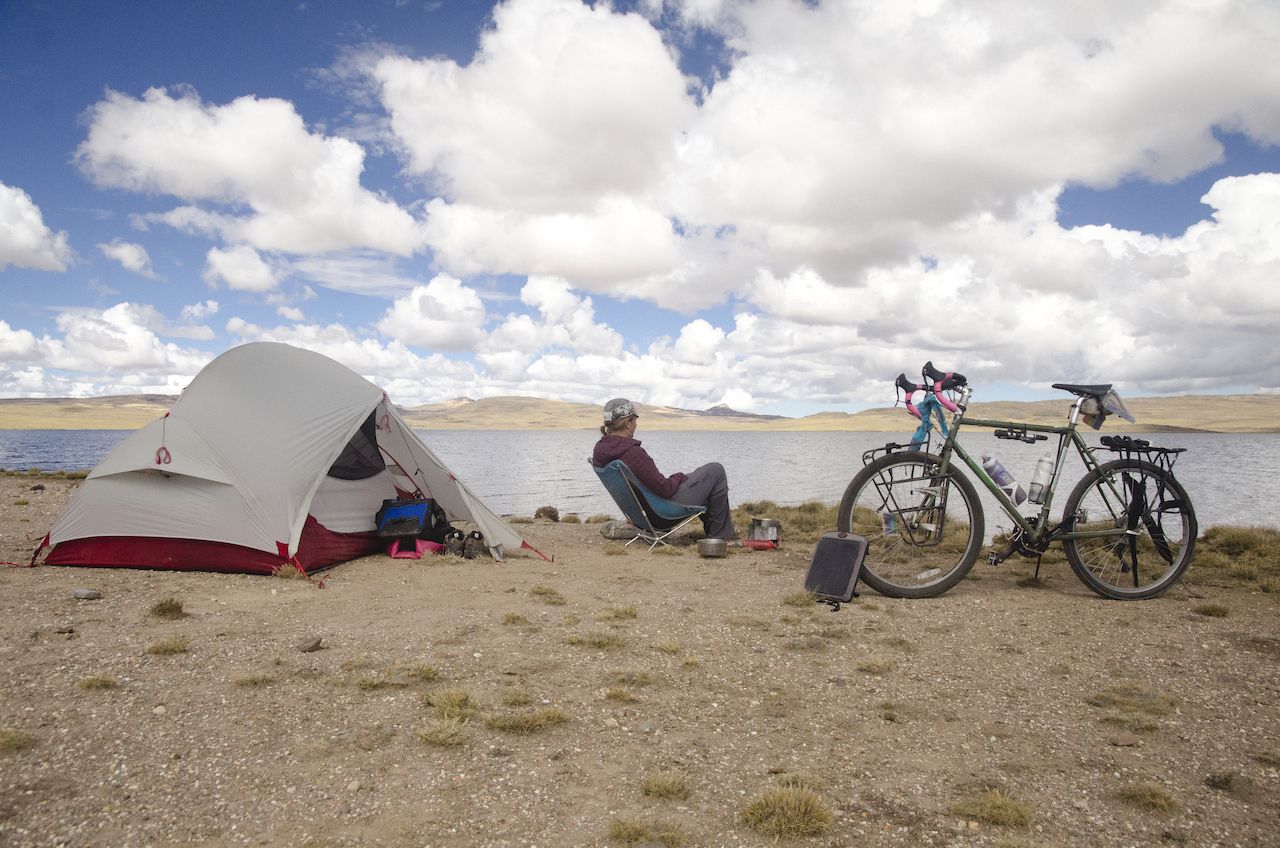 I am a white transwoman from the United States — the first transgender woman to bike the Pan American highway. Your cultural mileage — in terms of privilege, overall experience, and ease of travel — may vary depending on your country of origin, ethnicity, skin color, and gender identity. One cannot plan for every eventuality and happenstance to occur on a commute to work, let alone over the course of two-and-a-half years and 30,000 kilometers. For me, this trip reinforced that life requires an open mind and an open plan.

To get the most out of a trip like this you have to have a flexibility that allows you to deviate from your original idea and make spur of the moment decisions to turn left instead of right, or to follow a man named Juan to the little shack nearby where an old laptop and printer can make any document you need appear.

When I was planning my adventure and told people about what I was attempting, many would tell me that this trip would “change me” — as if that was not something I had considered. Of course this trip was life-changing. In going on a multi-year and multi-country bike trip, I found more internal peace in my life. I also found patience that you can only know by measuring distance in days. I’ll never know what I would be like today if I hadn’t gone on this epic bike ride south. I do know that you don’t have to go on a grand tour to have a life-changing experience; it’s just one of many ways that you can take time to slow down and look within yourself.