Mountain elitists of the Western United States, with their Rocky Mountain and Sierra Nevada ranges, like to own the conversation about what qualifies as a “true mountain experience.” But New Yorkers are in on a secret: the pristine, forest-flanked alpine lakes of Adirondacks; the near-perfect undulations of White Mountains; and the steeps of the Green Mountains all hold their own when it comes to the perfect place to escape the urban madness. Any further proof they may need, as if there’s not already enough, is a snowshoe outing away from any of the cabins listed below. These mountain escapes are far enough away, about five hours from NYC, but within a day’s drive so as not to require an overnight en route — and they all make for an ideal getaway this winter.

$125/night via Airbnb
Drive time from NYC: under five hours

Cozy barely begins to describe the Bull Crest Cabin, high in the Adirondacks near Elizabethtown (and conveniently not too far from the slopes of Whiteface Mountain ski resort). This one comes with all the fixins, including a toasty fireplace. Full kitchen, full WiFi, and fully surrounded by

Upon hearing about this new hotel coated in 24-karat gold, you might immediately think it’s in Dubai. It wouldn’t be an unreasonable guess, but in actuality, this new glitzy hotel is in Hanoi, Vietnam, and it’s being called the world’s first gold-plated hotel. The Dolce by Wyndham Hanoi Golden Lake opened this summer, and guests looking for ostentatious luxury won’t be disappointed.

The hotel is filled with gold-plated tubs, sinks, and toilets, and there’s even a 24-karat gold tiled infinity pool on the roof. And of course, this aesthetic applies to the food and drink too. Dishes served at the hotel are topped with edible gold flakes, and the cups next to the coffee maker have gold details. Approximately 2,000 points of gold were used to decorate the hotel, though the price per night is actually surprisingly cheap. 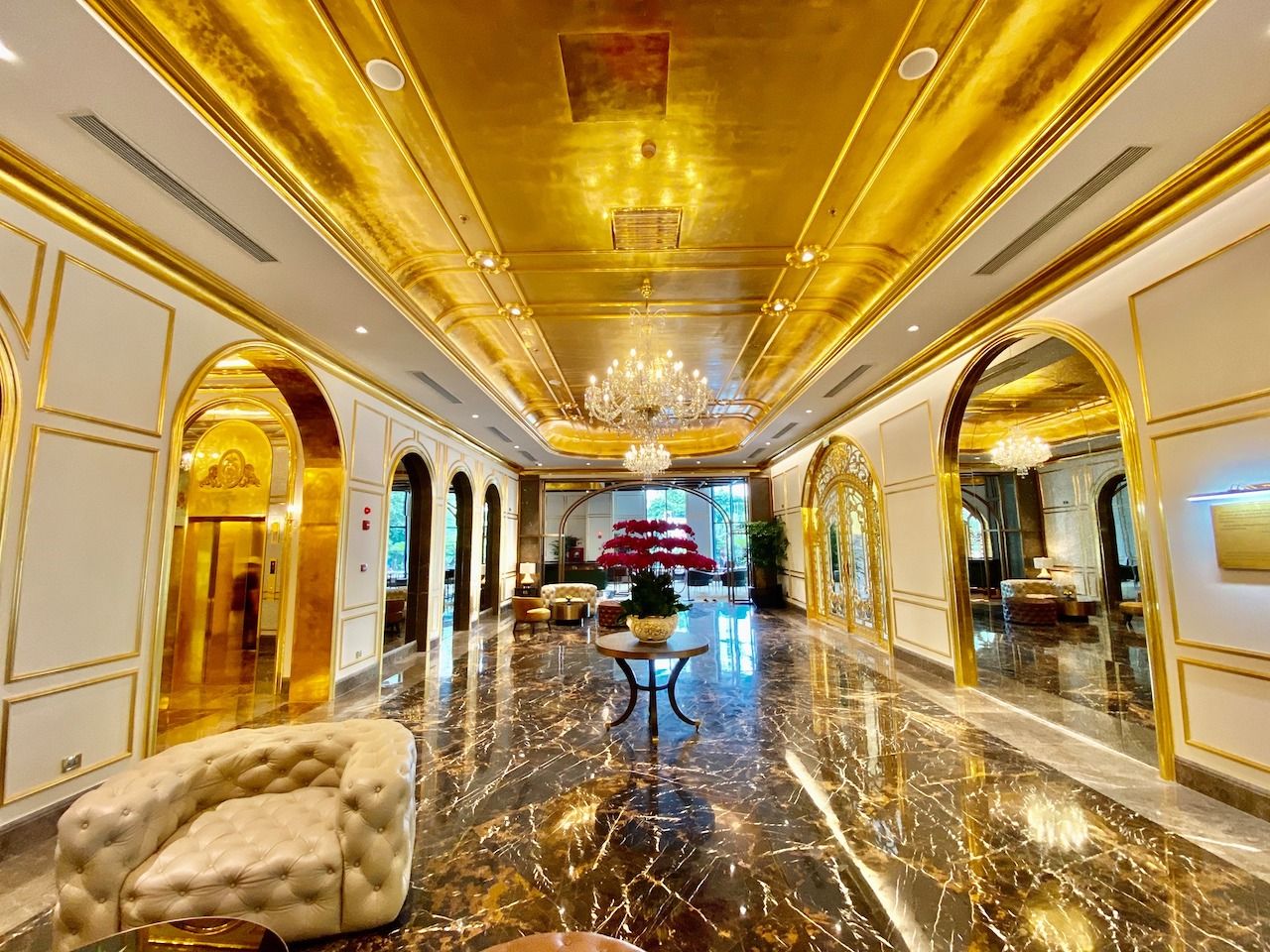 Rooms start at around $250, which feels like an absolute steal in a gold-plated palace. The 441-room property is conveniently located just 10 minutes away from the Hanoi city center and stands in stark, glamorous contrast to the many Soviet-era buildings that surround it. 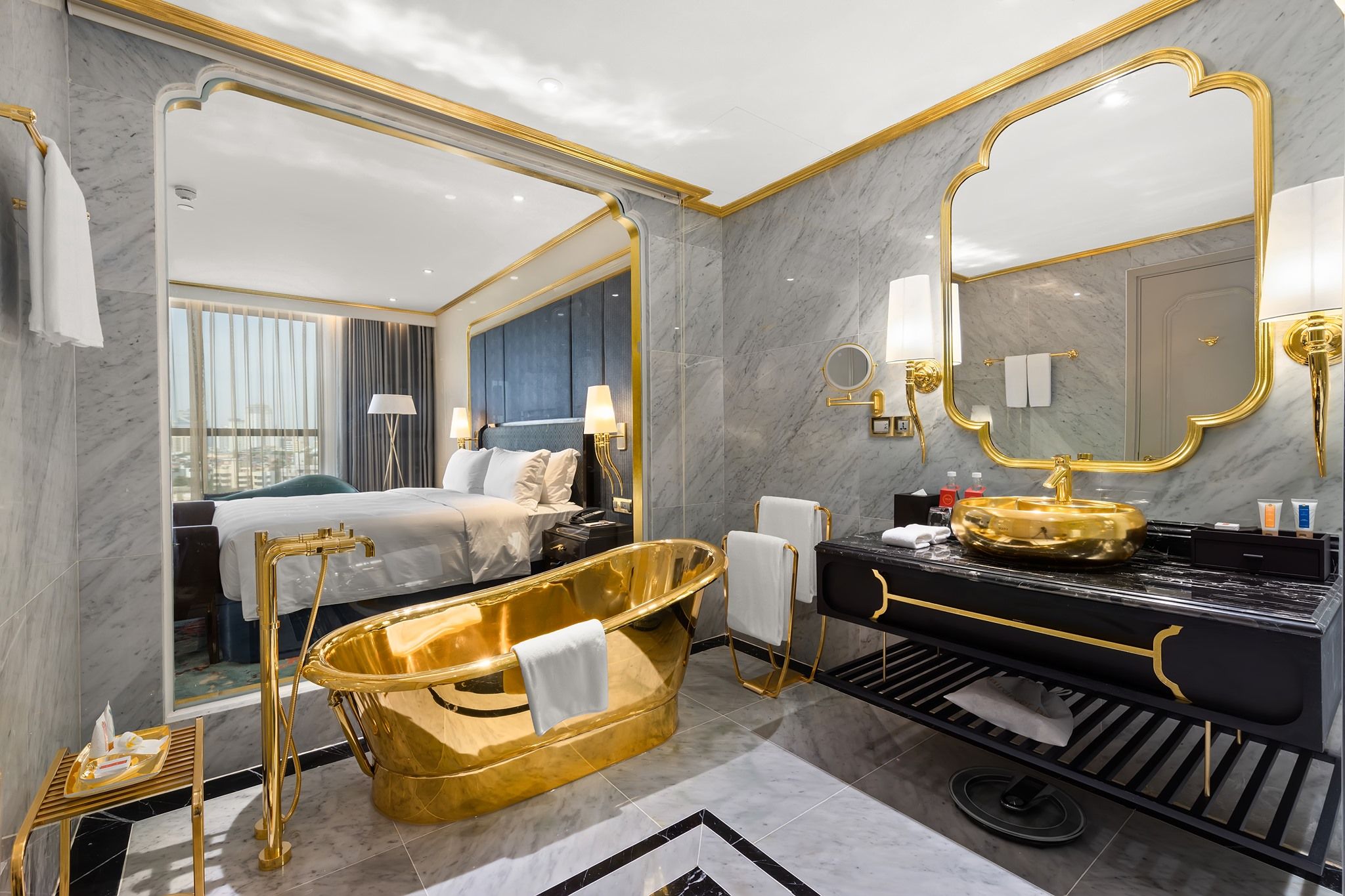 Costa Rica is giving away free trips for 2021

Hopefully travel will make a triumphant comeback in 2021, and we can stop longing for those faraway destinations we’ve had to put on the back burner. Costa Rica is already looking forward to the new year, with a campaign designed to encourage travel to Costa Rica. Visit Costa Rica, the country’s tourism agency, is asking people to nominate someone who has made a meaningful difference in their lives to win a free trip to Costa Rica.

The “Who is Essential to You” campaign is accepting nominations from all across the US. Fifteen winners will be selected and awarded a trip for two to Costa Rica for seven days. The prize includes roundtrip coach airfare to Costa Rica, six nights in hotel accommodations, a $200 meal voucher, ground transportation, and travel insurance (including COVID-19 coverage).

Nominations are being accepted starting November 26, 2020, through January 31, 2021, at 11:59 PM EST. The best part is you have over a year to take the trip; all trips must be taken by February 28, 2022. More information about nominations will be available online once the contest goes live on November 26, but you should be prepared to share a story about why the

Traditional Alaskan food and dishes, from seafood to reindeer

An abundance of natural resources has flourished for thousands of years in the untamed oceans and forests of Alaska. Alaska’s Indigenous people were the first to find nourishment in plentiful runs of salmon and herds of caribou, and today these two animals remain iconic in Alaskan cuisine. Alongside those two favorites, there is even more to love in Alaskan waters and forests.

The seafood can’t be overlooked: There are giant crabs stalking the ocean floor and oysters drinking in ice-cold, glacier-fed waters. One can also look to the trees for nourishment in the form of spruce tips and birch syrup. There are bunches of purple, red, and orange berries hanging from shrubs and trees, the key ingredient in Alaska’s famous berry cobblers. If you’re a forger, a hunter, a fisher-person, farmer, or gardener — or basically anyone who likes their food wild and fresh — Alaska is a wonderland of nutritious flavorful ingredients, oftentimes available right in your backyard.

“More than any other place I’ve ever visited, Alaska is a place where people expect to be able to live off the land, and that’s an idea that’s deeply ingrained in the culture,” Marks Adams, author of Tip of the

Qantas will require COVID-19 vaccinations to board

It seems like just yesterday that airlines and destinations were rolling out COVID-19 testing requirements to travelers. Right when we got the hang of the whole testing thing, they’re likely to change the rules on us once again. With the imminent rollout of COVID-19 vaccines, proof of vaccination is likely to be required before boarding planes or arriving in destinations, and Australia’s Qantas Airlines has already introduced this new rule.

Alan Joyce, the airline’s CEO, said Qantas has been looking at different ways to open up safely to international travel, and vaccination is a huge part of that. “We will ask people to have a vaccination before they can get on the aircraft,” he said in an interview with Australia’s Nine Network, “for international visitors coming out and people leaving the country we think that’s a necessity.”

While Qantas is the first airline to speak publicly about such a measure, it almost certainly won’t be the last. “I think that’s going to be a common thing talking to my colleagues in other airlines around the globe,” said Joyce.

Right now the vaccination requirement is only being considered for international travelers coming to Australia. When it comes to domestic travel,

Many Americans agree on the fundamentals of a classic Thanksgiving dinner: turkey, stuffing, and at least one starchy side. Pie is non-negotiable. Booze will invariably flow.

Yet whether that bird is roasted or fried, whether you call it dressing or stuffing, or whether your grandma’s yams skew savory or sweet depends on where you’re sitting down to dinner. And debates over which regional Thanksgiving menu is the most classic will probably rage for as long as there’s a fourth Thursday in November. At least in the contiguous United States.

Thanksgiving in Hawaii looks different. Poke, sashimi, and poi are likely to grace the table. Macaroni salad is more popular than green bean casserole. And pineapple may well be served in place of cranberry. Even the fundamentals that anchor both mainland and island menus are imbued with Hawaii’s distinct history, climate, and rich culinary heritage.

From a show-stopping bird that gets buried underground to pumpkin pie like you won’t find elsewhere, these local, multicultural dishes put a delicious spin on the Thanksgiving classics.