Transparent Sky Dome on Santorini is a luxurious glamping experience

With dreamy turquoise waters, black and red-sand beaches, and iconic white-and-blue architecture, Santorini is one of the most beautiful and most popular islands in Greece.

Another one of Santorini’s best features is its gorgeous sunsets. Boutique hotel Santorini Sky wants their guests to be wowed by the island’s sky and to do so, they added a transparent bubble to their accommodation offering, the Sky Dome.

The Sky Dome is located on the highest point on the island, 2000 feet above sea level. While in the bubble, guests get stunning views of the island all while enjoying the comfort of the dome, so they don’t have to worry about the weather. The dome is equipped with a bed, along with bluetooth speakers, and LED lights that a guest can control from their phone to set the mood. 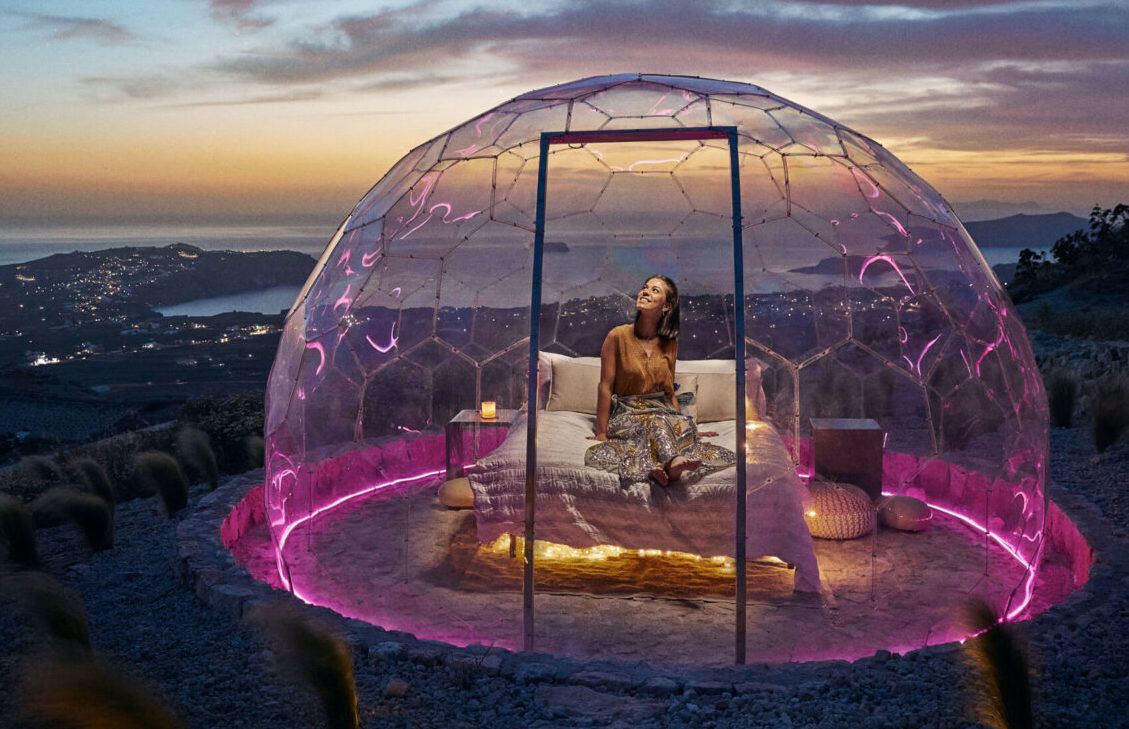 Sky Dome guests are also offered a wine tasting and dinner from Agaze, one of the best restaurants on the island.

The Sky Dome is not only available for hotel guests, but for anyone visiting the island. It can also be rented during the day. Prices start at $120 (€100) per couple, with resort

Set against an otherworldly backdrop of crisp mountains and pastel seas, Reykjavik has, in recent years, found itself firmly at the top of bucket lists around the world — and one visit to this quirky city is all it takes to leave you enchanted. The capital city of Iceland, Reykjavik, is celebrated mainly for its rich culture, breathtaking nature, and eclectic art scene. This sense of creativity can be felt throughout the organized cluster of houses and streets, the city’s walls adorned with colorful murals and its skyline interrupted by bold architectural styles.

But the city’s true heart does not lie within the brickwork of the eerie Hallgrimskirkja Cathedral or upon the stainless steel edges of the iconic Sun Voyager sculpture. To discover the real Reykjavik, in all its whimsical glory, you must cast aside your guidebooks and delve beneath the icy surface, swapping crowded museums and guided tours for traditional coffee houses and hidden footpaths. Here are some of the best local spots in Reykjavik.

Particularly magical during the chilly winter months, there is no better way to spend a crisp January morning than with a visit to the geothermal Sundhöllin

The best cities in the US for people with dogs

As pet adoptions soared during the pandemic, it’s not surprising that concerns over the environment we choose for our furry family has become a priority. Finding not only a suitable home but also a city that caters to all the needs of our pets is important. Thankfully, recent data from real estate agency Zillow and Rover, the world’s largest online marketplace for pet care, offers some great insight into the most dog-friendly cities in the US.

With Zillow focusing on listings that have pet-friendly features and Rover scrolling through its many dog owner accounts, the two came together to conduct a study that found that 24 percent of dog owners moved into a new home since the beginning of the pandemic. It also noted that an astonishing 62 percent would consider moving to accommodate their dog.

“This year, we spent an extraordinary amount of time with our pets, and many of us relied on their companionship more than ever. As a result, our emotional bonds with our pets also strengthened,” remarked Kate Jaffe, trends expert at Rover. “Pets are taking on an even greater role in our families, so it follows that our dogs’ needs are a top priority

Where to eat and stay in Little Tokyo District, Mexico City

Colonia Cuauhtémoc, also known as the Little Tokyo District, is probably one of the most underrated neighborhoods in the heart of Mexico City. With trendy areas like Roma, Condesa, and Juárez nearby, people often miss spending time in Cuauhtémoc.

Decades ago, this neighborhood was a quiet residential area with Art Deco-style houses and apartment buildings. But its fate changed when many Japanese immigrants arrived in the city at the end of World War II. In the 1970s, the Japanese embassy was established here, along with some Japanese shops and restaurants — laying the foundations of what is now known as Mexico City’s Little Tokyo.

When talking about the area, it’s impossible not to mention Edo Kobayashi’s name, along with his mini-empire of izakayas, ramen restaurants, sake bars, and other venues. Edo Kobayashi, whose birth name is Edo López, is of Mexican and Japanese descent. He is highly passionate about both sides of the Pacific Ocean. With his gastronomic flare, he has brought the highest standard of Japanese cuisine and hospitality to Mexico in spots like Rokai and Le Tachinomi Desu.

Kobayashi is undoubtedly the king of the neighborhood, but many other entrepreneurs have built little pockets of Japanese culture

A new form of aircraft will offer passengers the opportunity to zip between coastal towns at a high speed. Best of all, this half-seaplane, half-boat creation will run solely on electricity.

Recently, Boston-based company Regent announced the launch of the seaglider, an all-electric machine that flies just above the water. The first of its kind, the seaglider will be zero-emission, high-speed, and affordable.

In a press release, Regent explained that the vehicle has a range of 180 miles and can reach speeds of 180 mph on open water. This incredible speed will make Regent’s seaglider six times faster than a conventional ferry.

Similar to a hovercraft, the seaglider will fly above the surface of the water on an air cushion created by the pressurized air between the wings and the water. 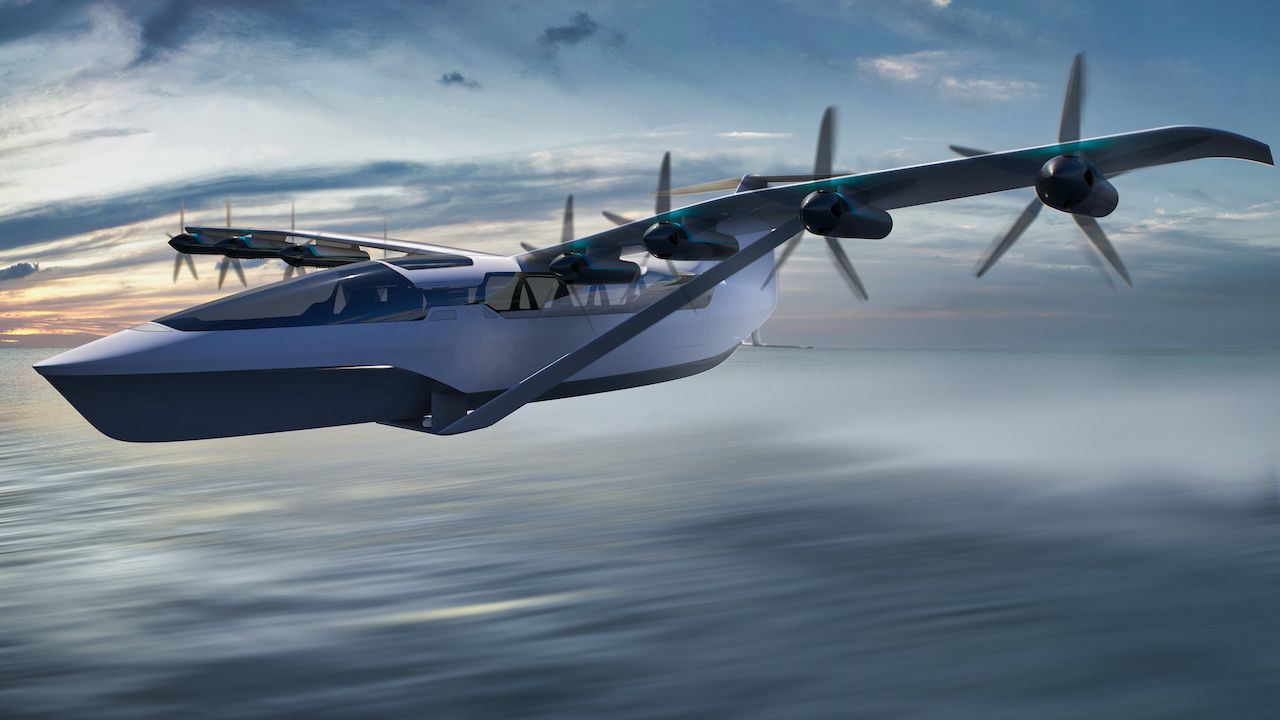 “The efficiency of coastal transportation will be 100x greater with REGENT. There is no other way to describe it,” said Dallas Mavericks owner and technology investor Mark Cuban.

Regent hopes the seaglider will be available to transport commercial passengers and cargo by 2025.

All Nippon Airways (ANA) announced in a press release that it is fitting 21 of its aircrafts with the world’s first-ever hands-free airplane bathroom door. The innovative technology, developed in collaboration with aircraft components manufacturer Jamco Corporation, will help limit the transmissions of virus, bacteria, or other microorganisms responsible for diseases.

“Guided by the principles of ANA Care Promise, we have continued to invest in the development and implementation of innovative technologies because the health and safety of passengers and our staff is the top priority,” said Shinichi Inoue, Nippon Airways’ senior executive vice president of customer experience management & planning. “The hands-free lavatory door is the latest example of us putting this principle into practice as we look for ways